Today is a big day for the men portrayed by Franklin’s Confederate Monument. #OTD1861 On today’s date 1861, an overwhelming majority of the adult, white male voters in Williamson County voted to secede from the United States and join the Confederate States of America. Today is their “Independence Day.” 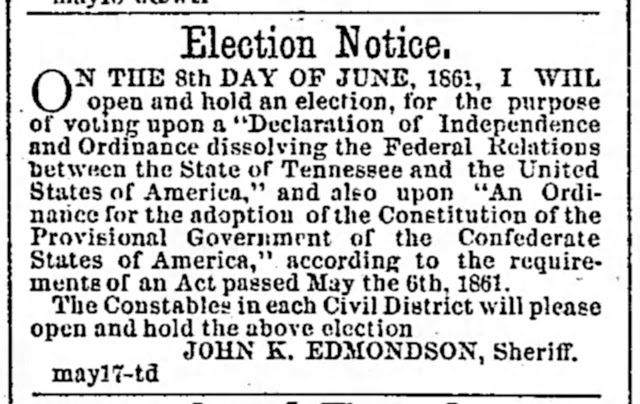 Once all the votes were counted, 1,915 white men voted in favor of the state resolution to secede. Only 28 remained loyal to this country. It is important to remember that the votes of the rebels represented only a small fraction of the total population in Williamson County. At the time of the vote, about 24,000 people lived in Williamson County, more than half of whom were held in cruel bondage.

You have surely heard the arguments -- the South seceded over “States Rights” not slavery.  Well, listen to what the Nashville Republican Banner newspaper said the vote was about the day before it was taken. In an editorial titled, “What is to be voted To-morrow” the paper wrote:

“The people of Tennessee will cast the most important vote to-tomorrow that they have ever been called upon to cast. It is to decide whether Tennessee shall declare her Independence of the Federal Union, or continue a party to that Union under a Constitution violated for the purpose of urging a war upon the Southern States - a war for the extermination of slavery. This is the issue, blink it and pervert it as you will. The people of the Northern States have been for nearly half a century haters of slavery. For many years their pecuniary interests and a regard for their constitutional obligations kept them from making this hatred an active political element. But slowly and surely the once insignificant and contemptible abolition party has gained in strength and numbers, until finally under the name of the Republican party, and under the lead of such men as Lincoln, Greely, and others, and with the watch word of the “irrepressible conflict” between free and slave labor, it absorbed the entire Northen masses, and succeeded in the first grand set of the drama - gaining possession fo the Executive Department of the Government. … Is there a Southern man who is willing to trust his honor, his interests, his constitutional rights in the keeping of a government controlled by the spirit of abolitionism and hatred of slavery which has so signalized the whole public and private career of the men in power at Washington, and which has become the ruling sentiment of the whole North?  . . . "

Pretty clear, isn’t it?  It was a “war for the extermination of slavery.”  Right from the get-go.  And these men were rising to defend it. You cannot whitewash it.

So the next time you see a post that says something like, "We need to keep our historical monuments to preserve our history" or  "Our history should never be forgotten or rewritten." Know that I agree with you in part - this history should never be forgotten and it should never have been rewritten and told as a false narrative. Just remember exactly what history it is that our monuments today are honoring and telling. And whose. Think about what parts of our history we choose to commemorate and to celebrate.  There are other stories more worthy of elevation.

This is the full text of the editorial -- you can download it here.
Posted by Tina Cahalan Jones at Monday, June 08, 2020