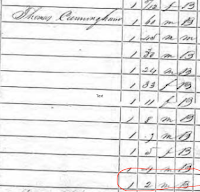 I recently found Osborne Cunningham's pension records identifying him as a Confederate body servant during the Civil War. As far as I can tell, he has not been extensively researched so it has been exciting to explore his story. Based on his pension and Census records he was born about 1850 in Williamson County, Tennessee and was owned by Thompson Cunningham, a white farmer.

In the 1860 census, just before the war breaks out, we find Thompson Cunningham to be a fairly well-to-do farmer living in the First District of Williamson County - out near Fairview. He reports $15,000 in real estate and $55,000 in personal estate - which would include his slaves. He has tripled the number of his slaves in the past ten years - now he has about 30, including mostly young children and babies. If Osborn Cunningham is among them he is most likely counted as the 11 year old boy shown on the slave schedule.


On May 2, 1861 the 1st Regiment, Tennessee Infantry was formed. William was promoted to Quartermaster Sergeant of the 1st Tennessee that same day. It's impossible to know what Osborne Cunningham's time in the war was like - but he likely served as his young master's camp slave - cooking for him, cleaning his sleeping quarters and clothes, and performing any other chores and jobs that he needed to have done - perhaps some related to the quartermaster department.  You can read an excellent account of the history of the Williamson Gray's service during the War here.  Bessie McLemore House of Franklin included the following statement in support of Osborne Cunningham's pension application: 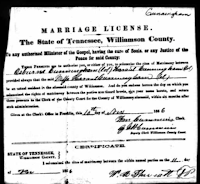 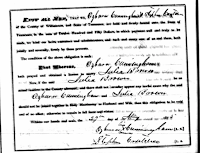 On November 11, 1866 - 18 months after returning from War - and when he was just 16 years old, Osborne married Harriet Cunningham.  Given that they had the same surname she may have been enslaved on the Thompson Cunningham farm as well. Unfortunately I have never been able to find any information about Harriet. I can't find Osborne and Harriet in the 1870 Census and interestingly, I can't find William Cunningham in that Census either - so perhaps whomever was taking that census missed the area where they were all living.  I think perhaps Harriet died - maybe in childbirth, which was common - because on May 30, 1875 a now 25 year old Osborne married Julia Brown.

In the 1880 Census Osborne "Oz" 31 and his wife Julia 28 are living in the 9th Civil District of Williamson County - which includes mostly the City of Franklin - and they are both working as domestic servants. We learn for the first time that both of Osborne's parents were from Virginia and that he cannot read nor write.


On February 6, 1889 Osborne was driving (a cart?) in Fernvale when he witnessed Dr. John Allen's fatal horseback riding accident and rendered aid. Perhaps he was making a delivery to the nearby Fernvale Springs. The resort was built in 1884 by Col John B. McEwen and burned down in 1889, although it was later rebuilt. 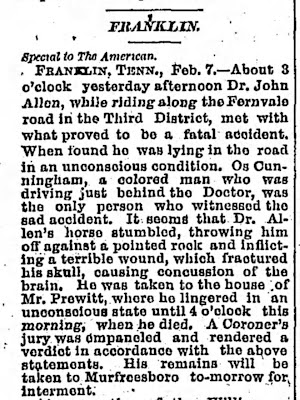 In 1891 Osborne Cunningham registered to vote in the 9th Civil District of Williamson County - which means that he was probably still living in Franklin. 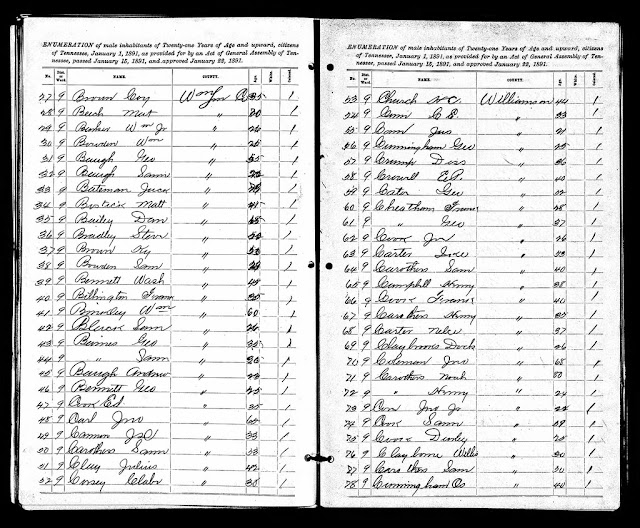 You can see that almost as many African American men registered to vote in this District as white - 368 to 420.


Osborne appears to have been the driver of the "Tally-Ho" or horse-drawn stage coach to the Fernvale Springs.  This article regarding the Williamson County News, a popular weekly newspaper around the turn of the century, describes how the editor, R.S. Owen (who happened to have built my house!) took their local correspondents to Nashville for a trip in 1897 in "Col John B. McEwen's Fernvale Spring's tally-ho, with the once famous negro driver Osborne Cunningham holding the reins."


1900 Census.  In the 1900 Census, "Oss" Cunningham and his wife Julia and 7 year old son John appeared in the Census.  They were living at 161 Granite Street - an address that doesn't exist today - but was perhaps in or near today's Hard Bargain neighborhood of Franklin.  They lived next to the white family headed by John Stokes.  Osborn and Julia had been married for 25 years and Julia stated that she has had only one child - presumably John.  Osborn is listed as a "Hostler" (someone who works with horses) on his own account.  They were renting their house.  Neither Osborn nor Julia could read or write.

Working as a Mail Carrier.  In 1901 the following statement appears to show a large payment of $25.75 to Osborne Cunningham through the Fernvale Springs post office in Williamson County.  Perhaps he delivered the mail as part of his work driving the tally-ho. 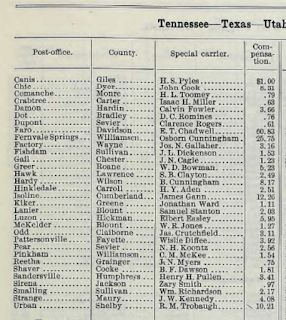 During the late 1860s newly-enfranchised African Americans had begun receiving appointments as postmasters, clerks, and city letter carriers.  Perhaps Osborne Cunningham - who had been a loyal "Confederate" - had been rewarded for his service during the War and was given a job delivering mail.  Approximately 150 African American letter carriers were appointed during Reconstruction.  By 1903 President Theodore Roosevelt had begun to attempt to use the power of the Federal government to help break down racial barriers for African Americans by protecting black postal employees in the south.  For example, in January 1903 Roosevelt chose to suspend service at the Indianola, Mississippi Post Office rather than accept the resignation of Postmaster Minnie Cox, who had provided excellent service; the townspeople wanted a white postmaster appointed. You can learn more about this history of black postal workers here.  It's interesting to consider that Osborne Cunningham may have been delivering mail in rural Williamson County against this backdrop.  This video also gives us an idea of what he may have looked like delivering mail from Franklin to Fernvale Springs.

Employment by Rev. McNeilly.   It appears as though beginning around 1907 - when Osborn Cunningham was about 57 years old - he began working for Rev. Dr. McNeilly in Nashville. This seems to coincide with the death of John McEwen and the closing of the post office and the Fernvale Springs  resort- so its possible that Osborne Cunningham had been an employee of both the resort (making deliveries of people and supplies) and also delivering mail.  When those opportunities disappeared, he may have looked for new employment and found it in the loyal Confederate of Rev. McNeilly.  Rev. McNeilly was Chaplain of the Confederate 49th Tennessee Infantry Regiment during the Civil War.  After the War he returned to Nashville and was the pastor at four different Presbyterian Churches, and wrote a book entitled Religion and Slavery in 1907. That same year, Osborn is listed in the Nashville City Directory as a driver for a church on the north west corner of 20th Avenue - most likely working for Dr. McNeilly. Osborne Cunningham was living at 1920 Church Street in Nashville. Apparently, by January of 1910, Rev. McNeilly's health and eyesight had failed to such an extent that the four churches he had worked at in Nashville determined to "relieve him of his pastoral responsibilities" and care for him for the rest of his life.

On April 9, 1921 the Tennessee legislature passed a law providing $10 per month for “those colored men who served as servants and cooks in the Confederate Army in the War Between the States." As a requirement for eligibility, applicants had to prove that they had served until the end of the War. On July 27, 1921 when he was about 71 years old Osborne Cunningham filed an application seeking one of these pensions. It was accepted and issued number 87. In it he states that he has no estate in his own name and that his "income is uncertain depending on jobs in Nashville and [his] wife lives on a small rented farm that affords a scarce living." Based on this it appears as though he may be living apart from Julia at this point.  His application is sent with a return address: Vernon Avenue, C/O Dr. J H. McNeeley -- [this was Rev. McNeilly's address in Nashville].  His application was witnessed by W.W. Courtney of Franklin. 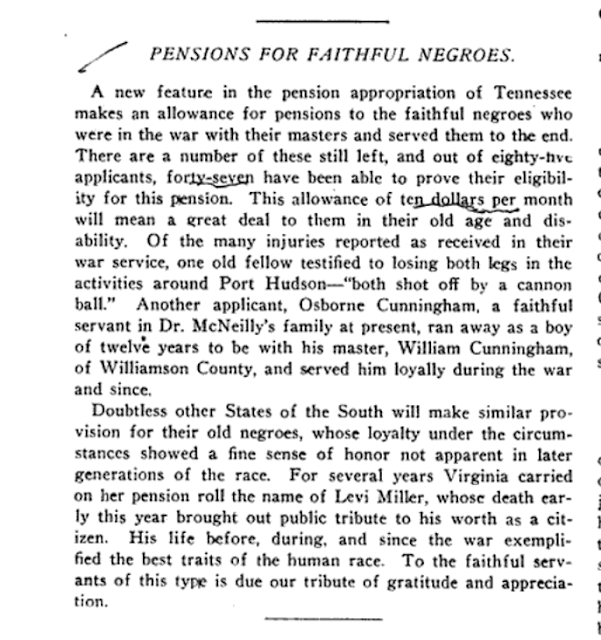 On April 23, 1923 Osborne Cunningham was murdered in Franklin, Tennessee. According to his death record he was hit on the left side of his head by a gun at about 9 o'clock in the morning. He was described as a 65 year-old [my research shows he would have been 73 years old] laborer and the husband of Julia [Brown] Cunningham. An autopsy was performed at Hubbard Hospital in Nashville but I have been unable to find a copy of this document.  Additionally, despite searching the Minutes of the Criminal Court records and newspapers during that time, I can find no reports that anyone was every charged with this murder.  Sadly, no information about his parents was contained on the death records - and I do not think he ever had any children - so we may never know more about Osborne Cunningham's ancestors.  Additionally, although his death record states that he was buried in "Franklin" I have not been able to locate his gravesite.  Rest in Peace, Osborne. 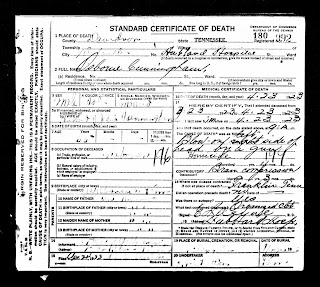