Significance of New Year's Day for the Enslaved of Williamson County

In the American South, during the period prior to Emancipation many slave holders would "hire out" their slaves as a source of additional income.  This allowed individuals who could not afford to own an enslaved person to benefit from their services; and it gave the slaveholder some flexibility with the capital they had invested in the human beings they were enslaving.  It was such a common - although horrific - practice that here in Williamson County there were agents who advertised their services to assist with the transaction.  This ad for Robert Moss in Franklin from the July 21, 1853 newspaper the Republican Banner and Nashville Whig shows that he is available to help with "hiring slaves" among other things. 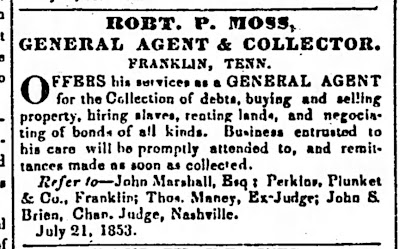 In the 1860 Slave Census in Williamson County, District 1, I found a listing for a William Spencer, Employer. He is a farmer and is credited with a 25 year old mulatto (biracial) female.  This leads me to suspect that William Spencer had hired her.  I have often wondered when I look for people on the census whether they would be counted under the people who "owned" them or the people who hired them.  There are times when I have suspected that people who "inherited" enslaved individuals hired them out to other locations and I am unsure as to what census they would be counted on - perhaps this is a clue.

Slaves Hired Out January 1 For a Full Year.  Traditionally, although not always, the enslaved would be hired out for an entire year to work for another family, plantation or business - sometimes at quite a distance from home.  At the first of year, sometimes called "Hiring Day" or "Public Day" the enslaved would be at risk of being hired out to their new employer.  In his book, Tennessee Farming, Tennessee Farmers,(p. 143) Donald L. Winters described that both sales and hirings traditionally happened on January 1st or the first weekday of the New Year. The next day,  usually January 2nd, the enslaved would be delivered to their new place of work until the following Christmas Eve.  Obviously, January 1st would be a day filled with anxiety and dread for the enslaved.  The waiting to find out if they or their loved ones had been hired out for the year - and by whom - would be a time of great concern. 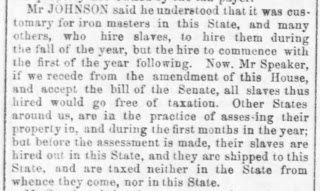 On December 17, 1857 the Nashville Union and American reported on a debate in the Tennessee legislature regarding tax assessments on property, including slaves.  It contains this reference to the fact that "it was customary for iron masters in this State, and many others, who hire slaves to hire them during the fall of the year, but the hire to commence with the first of the year following."  It also describes that "slaves are hired out in this State, and they are shipped to this State" - which shows how widespread the conduct was at that time.

This report in the January 22, 1851 Vicksburgh (Mississippi) Whig newspaper copied a report from the Franklin Review reporting that "negroes are hiring in Williamson county at high rates. A friend of the editor hired a field hand for $150 per annum [year]."

This item from the probate records of Peter Perkins, of the Perkins family of Two Rivers on Del Rio Pike in Franklin, Williamson County, shows that he was hiring out Mike for the year 1828 beginning on January 1st for the price of $92.00

Even the city of Nashville was hiring slaves for use as public laborers. On its financial statements submitted in October 1865, the report included mentions of "Notes cancelled during the year . . .For Slave Department negro hire $3,025.00 and For Hospital, negro hire $360.00." 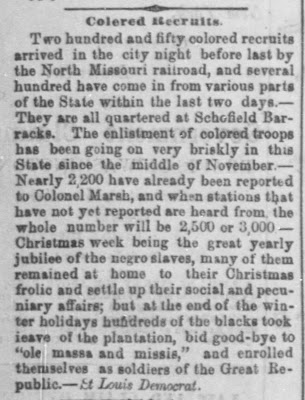 Christmas Week Holiday for the Enslaved.  Sometimes, slave holders would grant the enslaved the week between Christmas and New Year's off as a holiday.  The enslaved person would work until Christmas Eve, then be allowed to go to their home farm or plantation to visit family and friends.  This article appeared in the Nashville Daily Union on Tuesday, January 12, 1864 - although it originally seems to have appeared in the St. Louis Democrat.  The piece discusses how the Christmas week holiday during the Civil War turned into an opportunity to claim freedom - and for some a chance to enlist in the US Army.  "[B]eing the great yearly jubilee of the negro slaves, many of them remained at home to their Christmas frolic and settle up their social and pecuniary affairs; but at the end of the winter holidays hundreds of the blacks took leave of the plantation and bid good-bye to 'ole mass and missus' and enrolled themselves as soldiers of the Great Republic" [in the US Colored Troops].  I can't help but wonder if perhaps the Bostick sailors in my previous blog post may have done the same -- they all enlisted on January 4, 1863.  Maybe they used the Christmas holiday to leave the McGavock plantation in Arkansas and made their way to Memphis.

Slaves Hired Out to Perform Variety of Work.  Slaves were often hired out to perform a variety of types of labor.  Women might work in domestic jobs as cooks, laundresses, seamstress  or wet-nurses.  For example, the Daily Nashville Patriot newspaper on June 20, 1859 contains an ad seeking a slave who is a "good cook, washer and ironer" to hire out for the remainder of the year. Men might be hired to companies to work building roads, as brick layors, iron workers, and constructing railroads.  Children were not exempt from this practice.  They could be hired out to work in the fields, as house servants doing domestic chores, and in any other capacity. 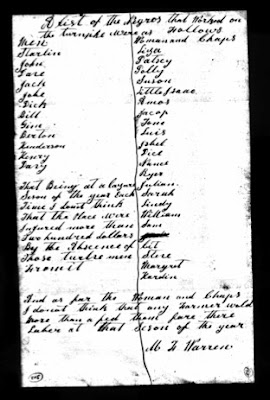 The enslaved from the John Bostick Jr estate in the Triune area of eastern Williamson County were hired out to work building a Turnpike.  As you can see from this list of their names, they were comprised of "men, women and chaps [boys]".

In this ad from the Nashville Union and American from August 8, 1862 Will Boyd, Jr. of Nashville is looking to hire out "some 10 or 20 likely negroes . . .for the present year. Among them some cooks, washers, and ironers. Superior house girls and boys."  Perhaps these are enslaved individuals that he was not able to hire out on January 1 and is now trying to find employment for the remainder of the year.

The enslaved of both sexes and all ages were hired out to work picking and growing cotton, tobacco and other crops, tending livestock and performing other tasks. Skilled slaves might work as carpenters or blacksmiths. In this ad from the Nashville Republican Banner on December 29, 1843, H. Golding Blackman is seeking to hire for the year 1844 eight field hands, as well as five "negro women as house servants" and a "first rate young blacksmith."

South Carolina College has conducted extensive research into the way their university-owned slaves were hired out, and says this about them on their website:  "The number of hired slaves and the variety of jobs reflected not only the flexibility of slavery but also the importance of slaves as capital for owners and hirers."  This was true throughout the south - including Williamson County.  We have seen examples of the enslaved in Williamson County being hired out, such as Freeman Thomas who says he was only about 16 years old when he was hired out for the first time.


Hiring out of slaves was a common way to support women who were widows or the unmarried or underage children of men who had died. I have found numerous examples of this in my research.  This accounting of John Crump of Williamson County shows the income collected for his family from the hiring out of his slaves for the year 1859 - ten years after he had died. The hiring out of the enslaved Henry, Jack, James, Ben, Clay, Abe, Ruth, Ellen and her children, and Mary and her two children earned the estate $645 for the year.

In another case, decided on January 8, 1856 in the Williamson County courthouse, the petitioner, a white girl named Ann Boyd, tried to obtain ownership of her inherited slaves prior to turning 21 so she can hire them out. The petition states that  she "has nearly attained to the age of twenty one years and that she is desirous of having her share in said slaves allotted and set apart to her in severalty ... by the 1st day of January next which will be the best time to divide them as they are now hired out and cannot be got together without trouble and expenses."  This gives a sense of how common, and important, it was to slave holders to have the flexibility of being able to hire out the people they enslaved.

Slaves Prohibited from Hiring Themselves Out.

Slaves were prohibited from hiring themselves out during any free time they might have - and their owners could be fined for allowing them to do so.  Numerous examples can be found in the local newspapers of slaveholders being fined for engaging in the practice.  In the Nashville Republican on February 18, 1855 I found this reference to Peter Oldham being fined $20 for permitted a slave to hire out his own time.  Additionally, on March 10, 1855 the Nashville Republican Banner and Whig contained this notice that Daniel Wheeler had been fined $20 and court costs for allowing his female slave to hire herself out; it also editorialized that, "The Recorder has to deal out the penalty of violated law in frequent instances of this kind; and he can't do it too rigidly for the public good."

Further Reading.  The book Incidents in the Life of a Slave Girl contains a chapter that provides a good overview of this process - and the great uncertainties that it meant for the enslaved.  The book is an autobiography by a young mother who was a fugitive slave from Virginia; it was published in 1861 by L. Maria Child, who edited the book for its author, Harriet Ann Jacobs. Jacobs used the pseudonym Linda Brent.  In the important work Divided Mastery, Jonathan D. Martin does an excellent job of analyzing the patterns of hiring out slaves and discussing how prevalent the practice was across the southern states.  Also, John Zaborney's book Slaves for Hire discusses the hiring of slaves in antebellum Virginia, particularly focusing on rural and agricultural settings similar to Williamson County. This February 2003 article in the Smithsonian Magazine describes how hired out slaves in the city of Charleston were required to wear copper neck tags for identification.

Emancipation Day Celebrations  As we celebrate a new year this January 1st, please pause to remember those for whom this day was one full of dread - a day of goodbyes: leaving children and spouses behind, homes and friends, and facing new masters and work that they may not know and may not like.  It makes my own personal worries about the coming year seem trivial in comparison.  However, New Year's Eve was not always an unhappy day, for on that date in 1862 Watch Night Services were celebrated in African American communities across America.  (You can learn more about them here.)

These services can be traced back to early Moravian gatherings that had been adapted into Methodist celebrations that came to be known as “Freedom’s Eve.” On that night, abolitionists, the enslaved and free people of color came together in churches and private homes all across the United States eagerly awaiting confirmation that the Emancipation Proclamation had truly become the law of the land. At the stroke of midnight, it was January 1, 1863; most slaves in the Confederate-controlled states were declared legally free. When the news was received, there were prayers, shouts and songs of joy as many people fell to their knees and thanked God.  Church bells were rung to spread the word.  Fifty years later in Nashville, schools, churches and organizations were still celebrating Emancipation Day with large celebrations.

So perhaps we should also focus on this happier history of the first day of January and the promise that it held for so many that incredible night not so long ago. 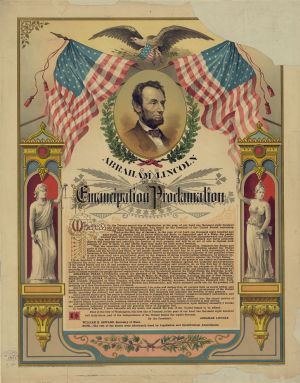