Bishop Otey and the enslaved

On July 31 (today's date) in 1842 Bishop James H. Otey of the Episcopal Church baptized his own infant son at St. Peter's Church in Columbia, Maury County, TN. At the same time, he also baptized two African American children - an infant boy named Charles and a girl named Rebecca. They were the children of a woman named Hannah. I believe that all three were enslaved by Bishop Otey. He is known to have enslaved people during his time as a priest in Franklin, Columbia and Memphis, Tennessee. 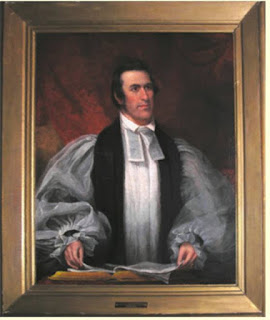 In 1830, Bishop Otey was living and preaching in Franklin, Tennessee. The Federal Census that year accredited him with enslaving three people:
The adult female may have been a woman named Charlotte.  In his diary dated March 16, 1833, he noted:

“My negro woman Charlotte died to-day, after a short and painful illness. Never have I been so seriously and powerfully impressed with the importance of faithfully instructing our domestics on the subject of religion. May God, of His great mercy, forgive my past neglect, and grant me grace hereafter to be more faithful and diligent. I now see that I did not do half the duty of a Christian master to my poor servant.''


This event - the death of Charlotte - seems to have motivated Bishop Otey to focus on - as he put it - being a better "Christian master." His diary contains several references to baptizing enslaved people. He also is said to have focused on three primary themes in his sermons: (1) redemption through Christ; (2) the religious education of the young; and (3) "the duty of caring for the negro."

By 1840, Bishop Otey had moved to Columbia, Tennessee. In his diary that year, on January 4, he noted that he had,

"Committed the body of my servant [slave] Joe to the ground, this evening at sundown, in hope of a resurrection to the life eternal. He died a professed believer."

Later that summer, he was enslaving four people according to the Federal Census.
Two years later, on today's date, he baptized two enslaved children - Charles (an infant) and Rebecca (a child).

In 1847, Bishop Otey noted in his diary entry on January 6th, that he "baptized, at family prayer, Hannah's child [a negro servant] by the name of John. May God keep him, even to His heavenly kingdom." Presumably, John was the younger sibling to Charles and Rebecca referenced above.

On another instance, in a letter to his wife he noted that he was sending some items home to his family from a trip to Europe. Among the items were some "things for the servants [slaves]" that should only be given to them if they displayed "worthy conduct."

"I have made such preparations for my voyage as seem expedient. I send home my old trunk. Within, you will find a silk dress for yourself, a dress for Mary, a Sandford and Merton [a children's book]. and a box of tools for Mercer, a calico dress for Peggy and Kitty and Becky, a jacket for George and Edmund and Jack, and a pair of pants for Tom. These things for the servants are at your disposal, to be given or withheld according as they show themselves deserving by their worthy conduct."

Two things are worth noting about this passage.  First, Peggy, Kitty, Becky, George, Edmund and Jack were people he and his family were holding in bondage. Also, note that his wife was receiving a silk dress, but the enslaved received calico.
By 1850, Bishop Otey was enslaving six people in Maury County, Tennessee. They were counted in the Federal Census that year as a:
Bishop Otey left for Memphis around 1852. He appears to have left behind in Franklin some enslaved people who he hired out as a way of profiting off of their work.  [You can learn more about this practice in my blog post on the topic here.] A teenager in Franklin at the time recalled later in a Memoir how

"We got along fine, we always had a good negro man and woman hired. (Father did not believe in owning negroes.) We generally hired them from an estate. I still remember affectionately Uncle Frank and Aunt Becky, who belonged to the Bishop Otey estate, real negroes. Father did not like for yellow negroes or mules to come on his place - no hybrid for him."

On January 1, 1860, Bishop Otey gave a sermon in which he used a common justification for the institution of slavery: that it was beneficial for those who had been kidnapped from Africa and simultaneously providently provided by God to fulfill for the white men their "peculiar need of labor."  He wrote,

Have we reflected also, that, since the progress of our national development and growth began, the inventive genius of man has brought to light, and laid at our feet, as if for our more especial benefit, the most important agents for advancement in all the pursuits and occupations which elevate individual character, or promote national exaltation? With a mighty continent to occupy, vast wildernesses to penetrate, immense forests to fell and subdue, mighty rivers to make navigable, roads to construct, and intercourse to be established, we stood in pecular need of labor. The invention of the cotton-gin enables the cotton-grower in a day to perform the labor of months in preparing that article for market. The application of steam to machinery and navigation is a giant's stride in the same direction: it is equivalent to the employment of millions of hands in the pursuits of industry, and elevates the cotton-plant, by the use of the steam-power loom, into the commercial staple of the world. It is said to be the grand regulator of trade. It furnishes the readiest, the cheapest, and the best article for supplying clothes to the people of every clime, to the barbarian nad the civilized, to the bond [i.e., enslaved people] or the free man. How wonderful the working of God's providence! The labor of the negro is made tributory to the work of supplying his nude countryman in Africa with clothing, thereby inspiring him with self-respect, and thus opening the way for the introduction of Christianity and civilization.

By the summer of 1860, Bishop Otey was enslaving 7 people in Memphis, Tennessee:
The following year, the Civil War had broken out.  Initially, Bishop Otey was a staunch Unionist.  However, by May 1861, his position had shifted and he sided with the Confederate States of America.  In a letter to a northern priest who was considering coming to Tennessee, he wrote:

"The party that elected Mr. Lincoln proclaimed uncompromising hostility to the institution of slavery - an institution which existed here, and has done so from its beginning, in its patriarchal character. We feel ourselves under the most solemn obligations to take care of, and to provide for, these people who cannot provide for themselves." [James Hervey Otey, First Episcopal Bishop of Tennessee, by Donald Smith Armentrout, p. 91; See Also Bishop Otey's Pastoral Letter, dated 1861.]

When War came to Tennessee in 1862, enslaved people began to emancipate themselves all across the State.  It appears as though those enslaved by Bishop Otey did the same.  On October 4, 1862, he noted in his diary that:

“I do not regret the departure of my servants, except Lavinia and Nora (children of eight and seven years of age): I pity them. I have endeavored to treat them always humanely. They had very little work to do; were always taken care of when sick, as other members of my family. They had as comfortable rooms, and as many necessary comforts, as myself. If they can do better by leaving me, they are free to do so. I told them this before I left home."

Lavinia and Nora were probably the 6 and 3-year-old girls noted on his 1860 Slave Census. I understand that Bishop Otey was likely sincere in his belief that he always treated those he enslaved "humanely" - but that was not possible.  As I have written before, there is no such thing as a "good" or "kind" slaveholder in situations like this. Bishop Otey was holding people in bondage, hiring them out for his personal benefit, and profiting off of their stolen labor. And that is at the very best case scenario of the worst that he did to them. He may have sold or bought people, separating them from their families and friends, he may have physically or psychologically punished them, he may have provided inadequate food or shelter - many other enslavers did so. Also, as noted above, he did not send equivalent gifts home to the enslaved people as he did to his own family - the treatment was disparate.
Bishop Otey's daughter recalled, following his death what kind of an enslaver he was:

There appears to be no understanding of the trauma that her father peperatrated towards those he enslaved - including the little girls Lavinia and Nora. In all likelihood, he used a perverted form of Christianity as a weapon - to instill in those he enslaved that their role was to be subservient and to accept white supremacy.

On March 14, 1863, Bishop Otey wrote his will.  In it, he distributed people - men, women and children - along with books and household items to his children.
To his son, he left "the servant boy Tom."
Evidently, the other people he was holding in bondage had escaped his control. His will noted that, "in the event of the recovery of the little Negro girls known as Veeney [probably Lavinia] and Nora, I bequeath  ... them to my daughter."
It went on to stipulate:

"I had intended other disposition of the other negroes George, Peggy & Beecy [Rebecca?], but I wish in the event of their recovery that they be sold and proceeds placed with the distributed share of my estate."

This seems to be a harsh provision -- he intended that if his executors could recapture the three people he had held in bondage, that they would be sold away.
I share this information not to denigrate Bishop Otey.  I am a member of St. Paul's in Franklin -the first church he founded and built. Roger and I were married there and our girls were baptized there. However, as much as I appreciate all that Bishop Otey did to found St. Paul's, we should not forget all that he did to Charlotte, Joe, Charles, Hannah, John, George, Tom, Peggy, Rebecca, Lavinia, and Nora. Their stories and memories are important as well.

Posted by Tina Cahalan Jones at Tuesday, July 31, 2018 No comments: