On December 20, 1864, three white officers of the US Colored Troops were ambushed near Triune, in eastern Williamson County. They were taken prisoner, and marched to near Columbia, Tennessee, where they were all shot in the head. One man survived to tell the tale.

According to an account written by Lt. Fitch on January 3rd, 1865:

"I was captured on the 20th of Dec., 14 miles in a SE direction from Murfreesboro [Nashville?] in Company with two other officers Lieut. D G Cooke, 12th US Col and Capt C G Penfield 44th USCI by a Company of Scouts belonging to Forrest's command numbering 36 men commanded by Capt Harvey. As soon as captured, we were robbed of everything of any value incl clothing. We were kept under guard for three days with some other prisoners (private soldiers of Gen'l Steedman's division who were captured near Murfreesboro) until we reached a small town called Lewisburg some 18 miles south of Duck River. There the officers were sent under a guard of four men to report as I supposed to Gen'l Forrest's Headquarters. The guards told that was their destination. They took us along the pike road leading from Lewisburg to Mooresville about five miles and then left the road and turned to the right for the purpose as they said of stopping at a neighboring house for the night. After leaving the road about half a mile as we were walking along through a wooded ravine the men in advance of us halted, partially turned his horse and came up, drew his revolver and fired on me without a word. The ball entered my right ear just above the center passed through and lodged in the bone back of the ear. It knocked me senseless for a few moments. I soon recovered however but lay perfectly quiet, knowing that my only hope [page 2] lay in leading them to believe they had killed me. Presently I heard two carbine shots and then all was still. After about fifteen minutes I staggered to my feet and attempted to get away but found I could not walk. About that time a colored boy came along and helped me to a house nearby. He told me that the other two officers were dead, having been shot through the head.

That evening their bodies were brought to the house where I lay. Next morning they were decently buried on the premises of Col. Jno C. Hill nearby.

The shooting occurred on the 22nd and on the 23rd about midday one of Forrest's men came to the house where I was lying and enquired for me, said that he had come to kill me. The man of the house said that it was entirely unnecessary as I was so severely wounded that I would die anyway and he expected I would not live more than an hour. He then went away saying that if I was not dead by morning that I would be killed. After he left I was moved by the neighbors to another house and was moved nearly every night from the house to another until the 27th when I was retrieved by a party of troops sent from Columbia and brought within the federal lines.

The privates were sent off on a road leading to the right of the one we took about in the direction of Columbia I should judge. I cannot but think they were killed as about that time our forces occupied Columbia, the rebel army having retreated. There were 12 Privates belonging, I think to Cruft's Brigade. 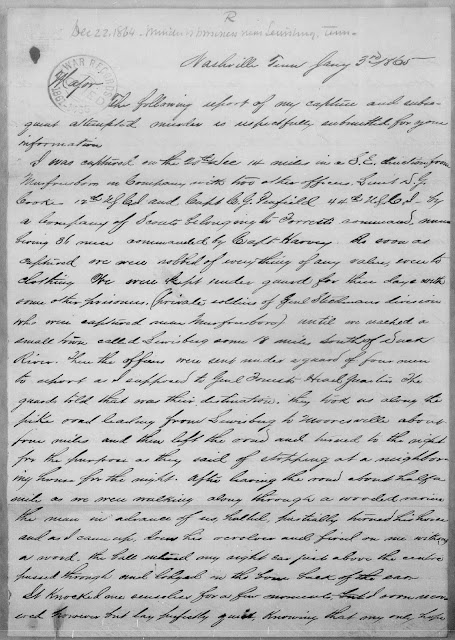 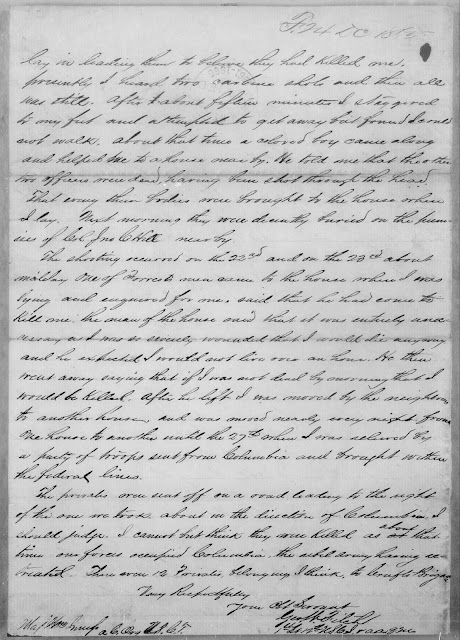 It seems possible, if not probable, that the officers were murdered instead of being taken as POW's in reaction to their status as officers of Colored Troops.  Two years earlier, in late December 1862, Robert E. Lee, had issued General Order 111 that stated in part, "3d. That all negro slaves captured in arms be at once delivered over to the executive authorities of the respective States to which they belong, to be dealt with according to the laws of said States.
4th. That the like orders be executed in all cases with respect to all commissioned officers of the United States when found serving in company with armed slaves in insurrection against the authorities of the different States of this Confederacy."

In other words, former slaves would be returned to slavery, while their white officers faced execution. On May 30, 1863, the Confederate Congress accepted the policy but added a condition that captured officers were to be tried and punished by military courts. Clearly, this did not happen in the case of the captured officers in Triune.
In response to their murders, and the suspected murders of the privates, Major General George H. Thomas, in command of the US forces in this part of the country, wrote a letter to John Bell Hood of the Confederate Army. He described the killings as "cold-blooded murder of prisoners of war." He also stated that:


"It is my desire as lies in my power to mitigate the horrors of this war as much as possible, but I will not consent that my soldiers shall be thus brutally murdered whenever the fortunes of war place them defenseless within your power. Such acts on the part of soldiers of your army are by no means rare occurrances. . . . Should my troops, exasperated by a repetition of such acts, take no prisoners of war at all in future, I shall in no matter interfere in this exercise of their just vengeance, and you will fully understand their reasons as well as mine who is responsible for the inauguration of the dreadful policy of extermination." 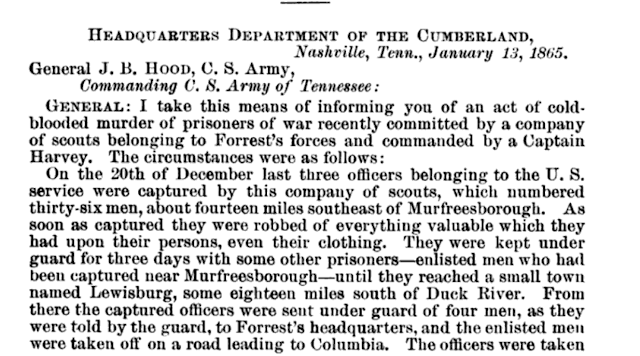 Major General Thomas was not the only officer who was frustrated by the Confederates' behavior at Triune. General Ulysses S. Grant addressed Robert E. Lee, Commander of the Confederate Army on March 14, 1865, directly about the matter. Grant wrote that,

"It is not my desire to retaliate for acts which I must believe are unauthorized by commanders of troops in arms against the authority of the United States, but I would ask to have those barbarous practices prohibited as far as they can be controlled." He then referenced the killing at Milliken's Bend of the white officers of US Colored Troop soldiers. "I believe it has been the practice with many officers and men in the Confederate Army to kill all such officers as may fall into their hands." 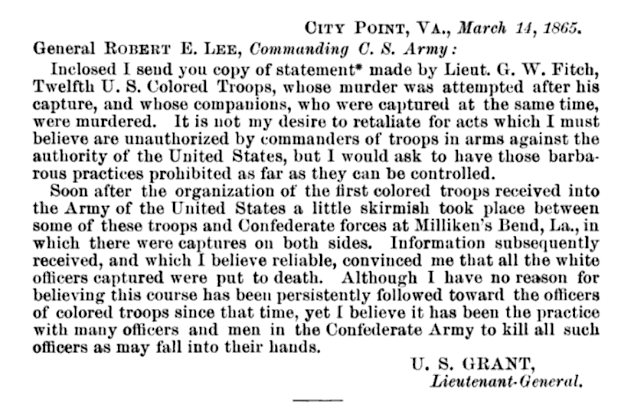 Lt. Fitch, the only man to survive the murders appears to have joined the US Colored Troops as a citizen, not from another regiment. He enlisted in August 1863 and was quickly assigned to the Quartermasters Department. He served in that capacity, quickly moving up the ranks to become the acting assistant quartermaster until the time of his capture and injury. Following a brief hospital stay and recovery, he returned to work and was moved to work at the Contraband Camp in Clarksville, Tennessee. In June of 1865, he was promoted to Captain.

Captain Charles G. Penfield was born in Michigan. His father, William Penfield, was a Methodist minister. When he was 22 years old, Charles Penfield enlisted in the 18th Michigan Infantry Regiment on Aug 26, 1862. Almost two years later, he mustered out as a Sergeant and was transferred into Company A, 44th US Colored Infantry Regiment. While serving in the 44th, he was captured at Dalton, Georgia along with Williamson Countians Pvt. Granville Scales, Pvt. Harrison Roberts, and Pvt. Abram Ralls.
About six weeks later, he was again captured at Block House No. 2 - also with Pvt. Scales of Williamson County. He escaped and made his way to Nashville where he participated in the Battle of Nashville. Just four days later, he was again caught and this time his luck did not hold out - he was murdered. Following his killing, near Columbia, Tennessee, on December 22nd, his body was initially buried in a private cemetery. It was later re-interred at the Stones River National Cemetery.

Lieutenant David Grant Cook was born in Chambersburg, Franklin Co., Pennsylvania, in 1835. As a child, his parents moved to Illinois and then Iowa. Cook became a school teacher in Illinois, intending to eventually become a Methodist minister. He mustered into the 92nd Illinois Infantry in August 1862. On August 14, 1863, he was sent to Tullahoma (Estill Springs) to report to his new assignment, 2nd Lieutenant of Company E of the 12th US Colored Infantry. Freeman Thomas, of Franklin, Tennessee, had arrived two days before to muster into the same regiment. In an interview, Thomas described his feelings upon joining the regiment:

I was sent to Tullahoma for training. This was the biggest thing that every happened in my life. I felt like a man, with a uniform on and a gun in my hand.

During his time with the 12th USCI, Lt. Cook's wife came from the north with their young child and joined him in camp.  This article provides an interesting description of six months with him in Nashville. Just before the Battle of Nashville, he was made acting quartermaster of the company. Cook was promoted to 1st. Lieutenant on December 8th, 1864, only 12 days before his capture and execution.

According to an obituary published in the Dubuque (Iowa) Democratic Herald on June 6, 1865, the remains of Lieutenant Cook were brought there and interred in the Center Grove Cemetery about six months after his death.  The coffin was wrapped in the American flag and carried to its last resting place by his friends. His wife had a monument installed and engraved with a wreath, a sword and a book bearing the inscription, "He Lived For God and His Country." It also pointedly noted that he, "met his death at the hand of guerillas at Cottage [College] Grove, Tenn."

Posted by Tina Cahalan Jones at Friday, December 20, 2019 No comments: