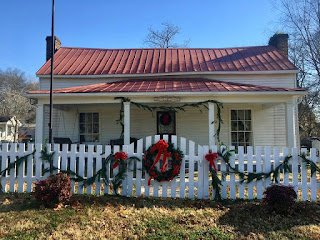 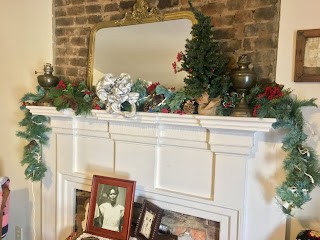 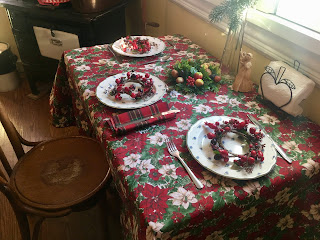 At the African American Heritage Society of Williamson County, we decided to highlight these letters at our monthly Porch Talk on the first Friday of December and also to publish them.  We decorated the McLemore House Museum, put up the Christmas tree, brought in baskets of traditional nuts, oranges, apples and peppermints and Rachael Finch and I hosted a lecture to discuss with the public Christmas traditions in the African American community in Williamson County from slavery through World War I.

I also began posting one letter each day in December beginning on December 1st.  My Flickr album with the letters - as well as some extras - can be accessed here.  The goal was to publish a letter each day until Christmas.  I also have tried to research the child behind the letters and post some background information where possible.  The local newspaper, the Williamson Herald picked up the story and published a lovely piece about our efforts.  Today Jesse Knutson with NewsChannel5 in Nashville came and interviewed Johnnie Patton Hamilton and her granddaughter Jendaya about Johnnie's grandmother, Henrietta Lee, the author of one of the letters to Santa Claus. It was such a privilege to get to hear from her about the woman that Henrietta grew up to be, from the sweet little girl that she was in 1918. Her family has an incredibly rich history that I was privileged to get to know better and to help share. 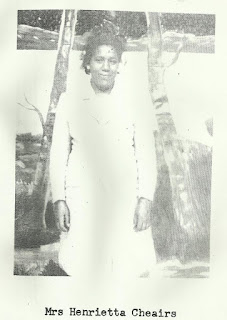 After the story aired, I came home and was working on this blog post and look what I managed to find -- this was not Henrietta's first published Letter to Santa!

Merry Christmas!  May the gifts keep coming to you as well this year!

Posted by Tina Cahalan Jones at Saturday, December 23, 2017 No comments:

On Saturday, December 2nd at 4 pm, Fort Negley Park hosted a ceremony to honor the people behind the 2,771 names listed in the "Employment Rolls and Nonpayment Rolls of Negroes Employed in the Defenses of Nashville, Tennessee, 1862-1863."


Dr. Eleanor Fleming, a Franklin native, participated in that program.  She was also interviewed as part of the Fort Negley Descendants Project - her interview appears here:

Many of those people who helped build Fort Negley - like Dr. Fleming's descendants - were from Williamson County.  So far, I have identified more than fifty men specifically.  I suspect the numbers are far higher.  Below is a list of their names, and if I have written blog posts about them, I have hyperlinked their names to those posts.  I encourage you to attend the ceremony on Saturday if you are able, and to remember these men.  Consider what they managed to accomplish - not just for themselves, but for their families, their futures and their country.  And if you think, or know, that you descend from a laborer on the fortifications around Nashville, please consider joining the fight to save Fort Negley Park.  Even if you aren't related to one of these laborers, but you believe its the right thing to do, as I do, to preserve a place to tell and honor their service and stories, please join the effort, in honor of these men:
Posted by Tina Cahalan Jones at Tuesday, November 28, 2017 No comments:

Free People of Color, Part I

When conducting genealogical research on African Americans in Williamson County, its easy to forget that some of your ancestors may have been free people of color.  We often forget there were free people of color here too since 12,000 people were enslaved by the time the Civil War broke out. More than half of the population was in bondage - no other county in middle Tennessee had more than half its population living in slavery in 1860.


However, don't forget to look in emancipation (also called manumission) records and the records for free people of color.  I will write another blog about the laws governing Free People of Color in Williamson County, but this post is primarily a listing of all the names of those individuals that I could find.  I hope that it proves useful to future researchers and someone may find a clue that helps piece your family tree back together.

Cynthia McCuthen appears to gave gained her emancipation as a result of the lawsuit that you can read a this link.  At issue was the provision in the will of the James McCutchen who enslaved her and several other individuals:

On November 3, 2017 I participated in a Porch Talk at the McLemore House with Harvey Chrismon. We discussed the history of Williamson County's African American veterans - all the way from an enslaved man who gained his freedom fighting for the patriots in the American Revolution to the Tuskegee Airmen.  We had a great turnout and a lively conversation.  It is always a wonderful experience to share the stage with Harvey whose voice adds a dimension to discussions that I can not contribute.


The Tennessee Tribune newspaper wrote a nice article about our program. 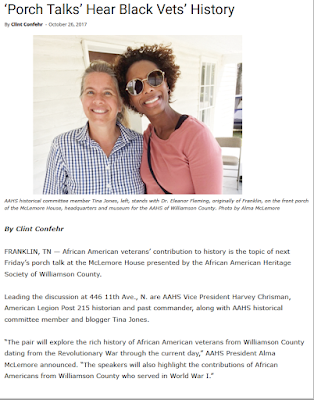 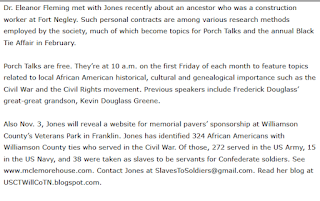 Posted by Tina Cahalan Jones at Friday, November 03, 2017 No comments:

On Saturday, October 21st I had the pleasure of speaking to members of the Fontaine Maury Society at the Historic Franklin Masonic Hall.  The Fontaine-Maury Society's annual meeting was held in Franklin, Tennessee this year and I was invited to give a lunchtime presentation to them about my work and how their interest in genealogy could be useful to African American families.  It was a privilege to be invited and I am grateful to Chip Hooper for  thinking of me and extending the invitation.  I wanted to make the presentation that I used more publicly available in case the Society members wanted to refer to it or share it with those who couldn't attend, so I am posting it here.  I'm also posting below the resources that I shared in the handout at the program.

If the presentation doesn't work, you can try this link - https://prezi.com/view/YsOY2unSGFNkHfJQIosC/

· Sons and Daughters of the U.S. Middle Passage http://www.sdusmp.org


Posted by Tina Cahalan Jones at Tuesday, October 24, 2017 No comments: