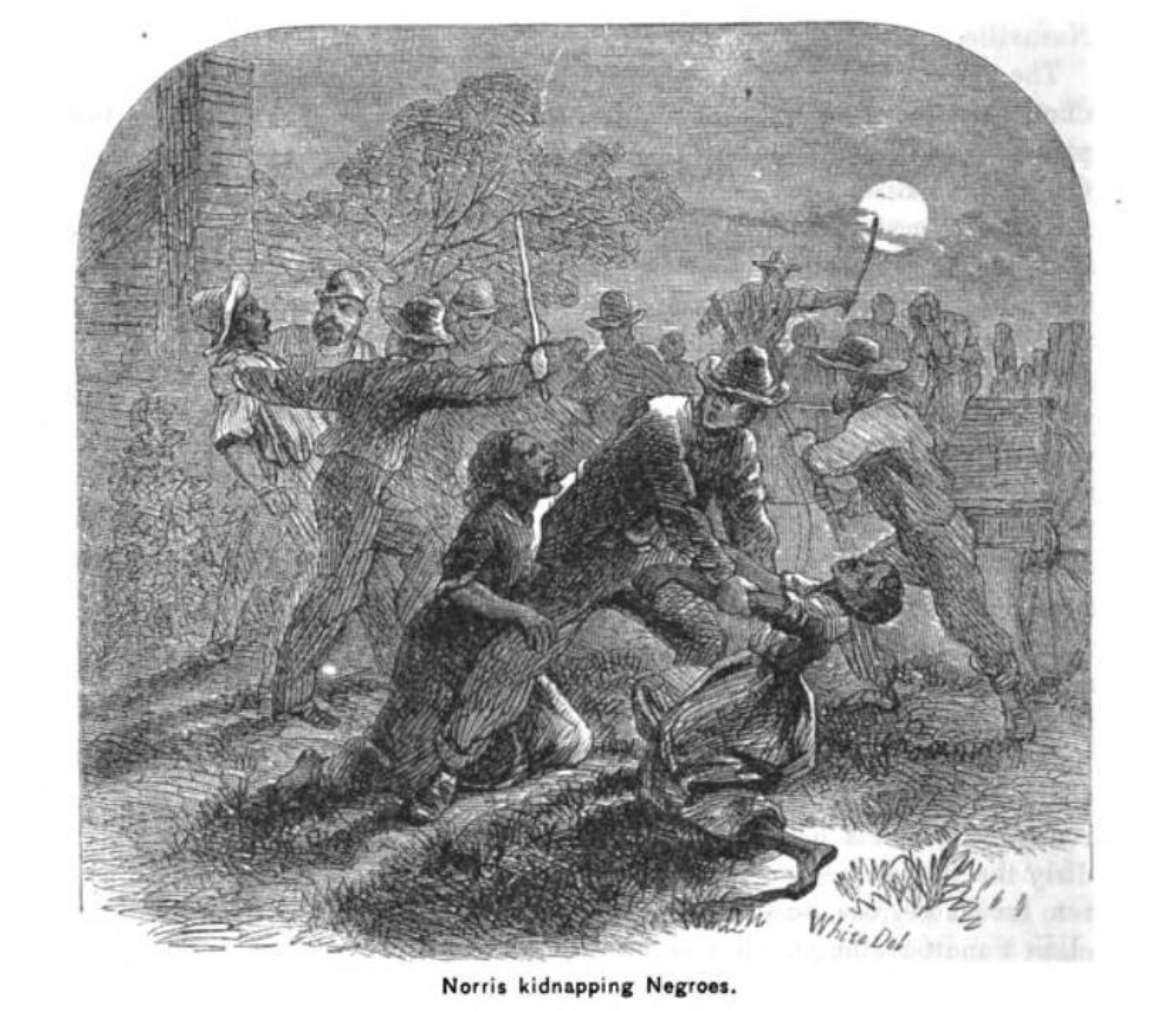 During the Civil War in Middle Tennessee - and likely many other places throughout the American South, people who had escaped from slavery were recaptured and sold back into bondage.
On September 20, 1862, an article appeared in the Nashville Daily Union newspaper. It described how eight Black people had been kidnapped, placed in the slave pen of Henry H. Haynes, and then taken South to be sold back into slavery.

According to the article, four people who had been impressed to work on the fortifications in Nashville - such as Fort Negley - had been taken “without authority to the slave pen” of Henry H. Haynes and “run off South by some one.” Four other people who had also been impressed by the Federal authorities were “found in the pen, where they had been taken, it seems without authority.” This was evidently a relatively common occurrence - and underscores the vulnerability of people who were seeking freedom from enslavement during the Civil War. These eight people had claimed their freedom, been impressed by the US Army in Nashville, and were then kidnapped and placed back into slavery.

For example, according to the Annals of the Army of the Cumberland, large numbers of enslaved people emancipated themselves from slavery and fled to the Federal camps where they found work. Initially, their enslavers did not try to regain them:

“One of the marked results of the war has been the escape from Rebel masters of large numbers of slaves. Flocking to our camps, where they are universally known as contrabands, they have been made useful in a multitude of ways by the Army of the Cumberland. As cooks, as waiters, as teamsters, as laborers, in the hospitals, in warehouses, in stables, on the fortifications, on steamers and railways, they have been constantly employed with the advantage to themselves and the government. ... At first no particular caution seemed to be exercised to prevent their escape or any considerable efforts put forth for their recovery. Their whilom [former] masters were apparently content to let them go or stay as they pleased, congratulating themselves that it was simply so much pork and cornbread saved when they abandoned the lean larder of a southern plantation for the ample store of a Yankee camp. Those left behind were enough for all their present needs, and too many to be decently fed and clothed from the scanty crops and scantier stocks of the Southern Confederacy.

However, beginning around January 1862, the attitudes toward these new Freedmen began to change. Instead, slave holders began to move the people they held in bondage to places more securely within the Confederate-held states; they also began to try to recapture people who had gained their freedom and fled to Nashville. Rewards were paid for their return:

With the last New Year [Jan 1862], however, another policy seems to have been inaugurated, either by the civil authorities at Richmond or by the military  leaders in camp. Whether it was that the number of fugitives had become alarmingly large, or that the influence of the Emancipation policy was feared, whether it was the dread of an armed insurrection or a general stampede to the Federal lines, or whether it was all of these combined, that caused the changes of policy, is not easy, and not necessary, to determine here. Suffice it to say that measures were at this time taken to remove into the interior and southward these slaves in Tennessee and other border states that could be reached, and to recover from the Federal lines as much as possible of those who had escaped thither.  The spies and scouts of the secret service soon scented this new game, and were on the alert. It was found that considerable rewards have been offered in Murfreesboro and other places in the Southern Confederacy for the delivery of negroes within the rebel army lines. Emissaries were found in Nashville, engaged in trapping and carrying away by force such likely negroes as they could lay their hands upon– at the same time acting as spies and furnishing the rebels with important information.

For example, this letter, signed by the Acting Adjutant of the Fortifications in Nashville describes a meeting between himself and H. H. Haynes "Negro dealer [in] Nashville" in July 1862 in which Haynes asked the Adjutant if he "was disposed to engage in the business [of stealing people] he would take any number [the Adjutant] would furnish, that he would come at any appointed time of the night & hour and receive them [the kidnapped people] outside of [the Federal lines], that he would pay [the Adjutant] $50 per head and after [Haynes] had sold or disposed of [the kidnapped people] he would divide the profits with [the Adjutant]." 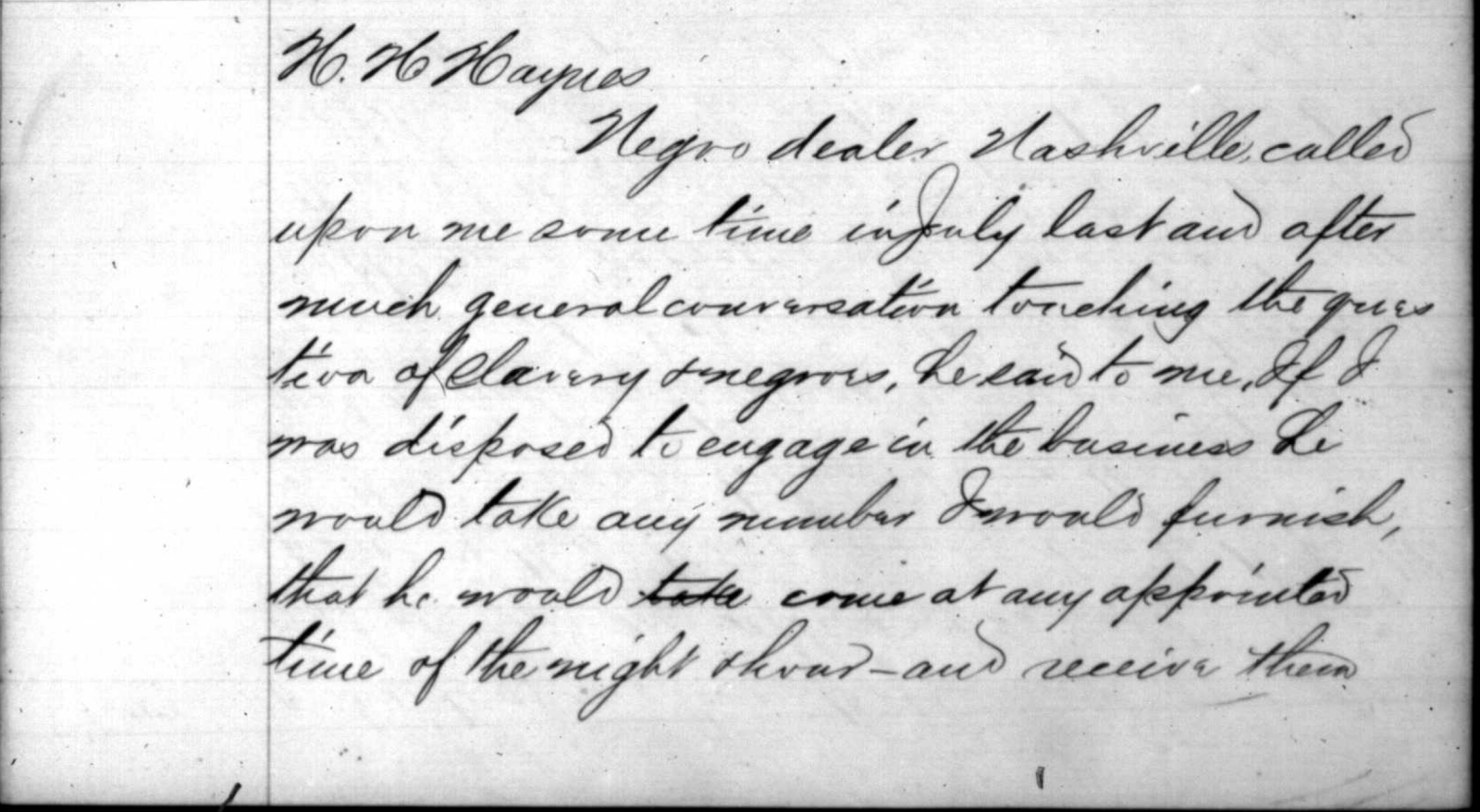 A Federal spy was sent to Franklin, Tennessee to meet with men who were well known as “extensive negro dealers.” Specifically mentioned was a man named "J. Prior Smith." I suspect perhaps this was S. [Sidney] Prior Smith who owned a large farm, in the 8th District of Williamson County and whose brother Preston was an officer in the Confederate Army.
According to the Annals of the Army of the Cumberland:

Measures were at once taken for the detection and punishment of those engaged in this nefarious traffic. A suitable person was dispatched to Franklin, Tennessee, where resided several men formerly well known as extensive negro dealers, for the purpose of obtaining reliable information of the parties in the business and the means by which it was carried on. With one of these men. - J. Prior Smith who had one million dollars of Southern money for investment in negroes - this agent became very intimate and finally engaged to purchase for him men, women, and children. Four likely children from 1 to 8 and 10 years of age he was to be paid $10 per pound; and for every man and woman that he would get out of Nashville and vicinity, he was to be liberally rewarded. Smith also gave him letters of introduction to prominent citizens of Nashville, both of them entered cheerfully into the scheme and suggested various means of carrying on the business.

The involvement of Prior Smith was further described by a Federal spy Henry Newcomer. in a statement in the evidence file against another conspirator, Dr. J. R. Hudson: "He has entered into an engagement with me to furnish [Prior Smith] with the negroes ... He is to get a pass from Dr. Swift to send outside of the lines fo milk fo the hospitals and in that way we are to get the negroes out."
The referenced Dr. Hudson was the son in law of John Napier, one of the owners of the Napier Iron Works in Dickson County.  He used this connection to further his efforts in kidnapping people back into slavery. His engagement was described in the Annals of the Army of the Cumberland:

One of them - Dr. J R [John Rolfe] Hudson - was particularly interested, and for months busied himself in kidnapping young boys and running them South. He tampered with the officers of the Engineer Corps in charge of the fortifications then being constructed., offering them half the profits, or $500 each, for every man they would permit him to steal out of their squad of laborers. He would procure passes for himself and servants to go out to his farm, and the servants would never come back. He would send them out with his wood wagons, and when once beyond the lines it would be passed on to their destination and sold. His speculations, however, were interfered with materially by the Army Police; he was indefatigable, in the business, and only ceased trapping Negroes when trapped himself.

In February 1863, the Provost Marshall began to gather evidence against Dr. Hudson through the use of the Federal spy, Henry Newcomer: "He [Dr. Hudson] proposed the trapping of boys from 14 to 15 years & smaller and told me [Newcomer] if I would engage with him & turn them over to him he could get at least one thousand dollars each, & he would give me $500 for each boy big enough to plow and men could be sold from $1,500 to $2,000 for each." 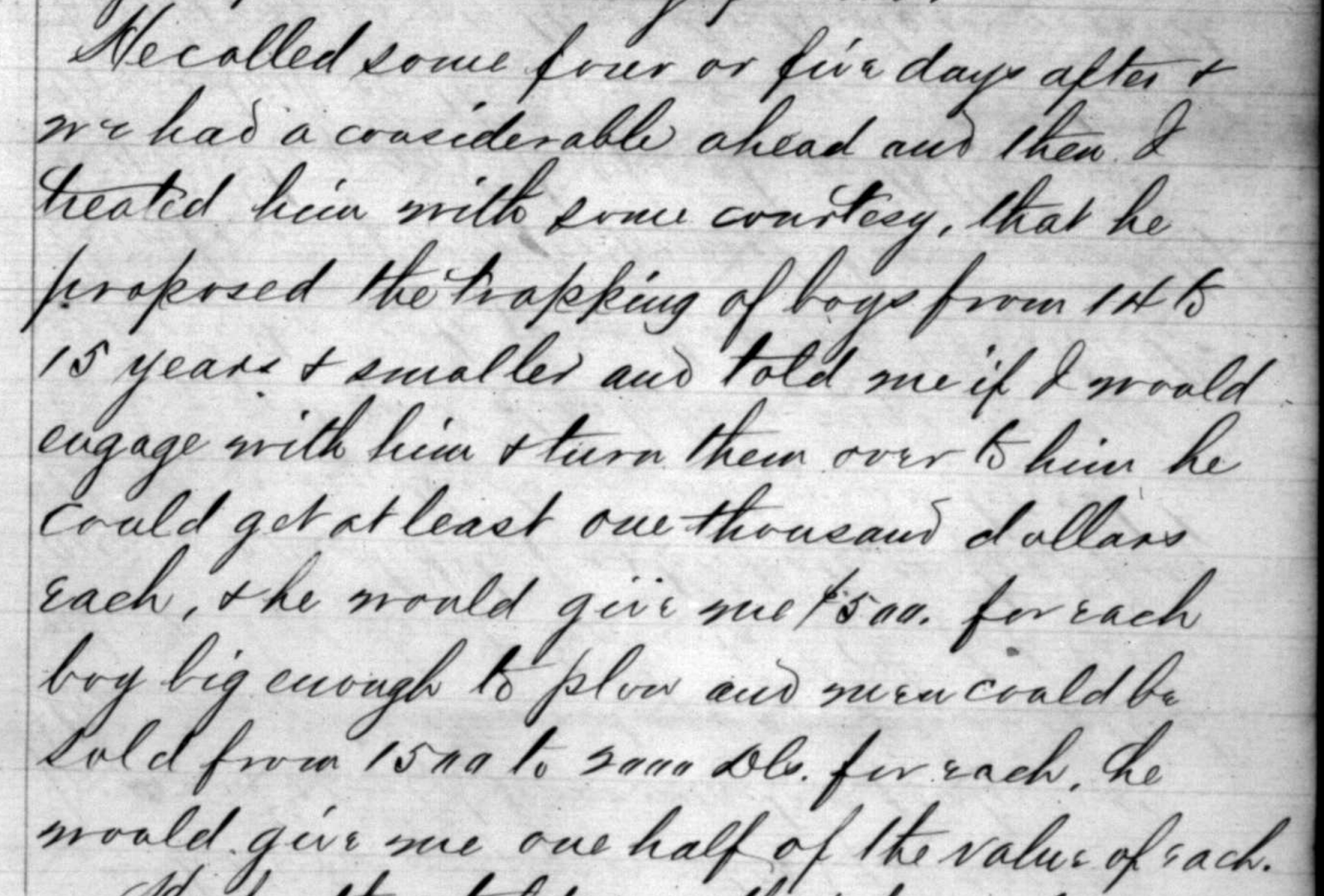 Later that year the US Provost Marshall, based on this evidence, sent Dr. Hudson and his wife “South via Vicksburg”.

The actual kidnapping of the newly emancipated people was also described in the records.  In the Annals, it was described how a man named Norris hired a group of men to help him re-enslave Freedmen for a minister who previously enslaved them and wanted them back:

Accordingly he takes with him five men, some of them armed, – and in the middle of the night makes a descent upon their cabin, and has them in his hands before they've barely know what is the matter. Four of the men he chains by locking their legs together with trace-chains, and fastens them together by twos. In an adjoining cabin are four other Negroes, ... he concludes he may as well take them along too, and they are surprised and secured in the same way. Resistance is in vain: they struggle as best they can, howling, begging, and imploring not to be taken down south. They might as well appeal to a stone. He knows no mercy, and shows none. Once in the wagon they are driven off as rapidly as his four horses can draw them. By twisting and turning from one road to another, he evades the Federal forces, and in about eight days reaches his destination, Huntsville, Alabama, when the Negroes are turned over to their ministerial master and Norris received his reward.

These troubling accounts make clear the precarious state that newly Freedmen found themselves in: despite having claimed their freedom and made their way safely inside Federal lines they could find themselves captured yet again and sold or taken back into bondage yet again.  It also clearly illustrates how desperately many Southerners were to cling to the vile institution of human slavery - even as it was crumbling around them.
Posted by Tina Cahalan Jones at Sunday, September 20, 2020