Following the Battle of Bull Run and for the early part of the Civil War, when soldiers were captured by the enemy, rather than being kept as prisoners of war, they were generally exchanged back to their own side under a complicated set of rules that was called the Dix Hill Cartel. It reminds me of a bit of a card game like Go Fish -- "I will trade you four privates for a sergeant." "No, I don't have a sergeant, but I will take four privates, and one corporal for a captain." This system was codified on July 22, 1862, and called for exchanges until all captured soldiers had been returned back to their original army to fight again another day.

On Christmas Eve, December 23, 1862, Confederate President Davis responded by issuing a Proclamation and General Order No. 111 that neither captured black soldiers (who he considered to be "armed slaves in insurrection") nor their white officers would be subject to exchange under the Dix Hill Cartel rules. In other words, black soldiers and their officers were worthless to him for the purposes of exchanges:

"3d. That all negro slaves captured in arms be at once delivered over to the executive authorities of the respective States to which they belong, to be dealt with according to the laws of said States.

4th. That the like orders be executed in all cases with respect to all commissioned officers of the United States when found serving in company with armed slaves in insurrection against the authorities of the different States of this Confederacy."


In fact, his Proclamation said that the black soldiers would be "dealt with" according to the state from "which they belong."  They were to be treated as runaway slaves.  And that their white men were to be treated as if aiding a slave revolt. This could mean being sentenced to death.
The Confederate response did not discourage President Lincoln, and one week later, on January 1, 1863, the Emancipation Proclamation became official and the United States began the active recruitment of black soldiers and sailors.
Locally, General Rosencrans responded from his headquarters in Murfreesboro.  On January 6, 1863, he issued General Order No. 3 stating that, as a result of Jefferson Davis' order "denying paroles to our officers, he [Rosencrans] will be obligated to treat them in like manner. . . . "In accordance with the preceding order, the Confederate officers taken prisoner at the Battle of Stones River [December 31, 1862-January 2, 1863] the other day, and who had been released here on parole with the freedom of the city until an exchange could be effected were the other day sent off to Alton, Illinois, to be kept in confinement."

In April 1863 the US government adopted the Lieber Codes, also known as General Order 100. They stipulated that the United States Army expected all prisoners to be treated equally, regardless of color.


On
May 1, 1863, the Confederate Congress passed a joint resolution that formalized Davis' December 1862 proclamation that the Confederate forces would not exchange black US Colored Troop soldiers who were taken prisoner.  It stated its belief that black US Army soldiers who had been recruited from among escaped slaves were still the property of their former enslavers and that their participation in the US Army was punishable. White officers of these soldiers could also to be put to death if captured.

Sec. 2 . . . [The Emancipation Proclamation etc] and other measures designed or tending to emancipate slaves in the Confederate States, or to abduct such slaves, or to incite them to insurrection, or to employ negroes in war against the Confederate States, or to overthrow the institution of African slavery and bring on a servile war in these States, would, if successful, produce atrocious consequences, and they are inconsistent with the spirit of those usages which in modern warfare prevail among civilized nations, they may, therefore, be properly and lawfully repressed by retaliation.

Sec. 3 . . . .the President of the confederate States [Jefferson Davis] is hereby authorized to cause full and complete retaliation to be made for every such violation, in such manner and to such extent as he may think proper.

On July 30, 1863, President Abraham Lincoln issued General Order 252, which effectively suspended the Dix-Hill Cartel until the Confederate forces agreed to treat black prisoners the same as white prisoners. The Presidential order required that for every US  soldier who was killed instead of exchanged, or for any soldier who was enslaved by the enemy, a Confederate soldier would also be killed or put to hard labor.  Large scale prisoner exchanges largely ceased by August 1863.


This resulted in a dramatic increase in the white prison populations on both sides. Large numbers of captured soldiers were held in prisons with terrible conditions such as Andersonville (Confederate) and Rock Island (US Army).
However, for the soldiers of the USCT, the implications are less clear. One of the most controversial and gruesome events of the Civil War was the Battle of Fort Pillow. On April 12, 1864 Confederates under the command of Nathan Bedford Forrest attacked the Fort which was garrisoned by about 600 men - about half of whom were black USCT soldiers with the 6th US Colored Heavy Artillery regiment and the 2nd Colored Light Artillery.  When the Confederate's attacked the Fort that day, most modern historians believe and official US Army reports emphasize that a deliberate massacre took place. Federal soldiers who survived stated that even though all their troops surrendered, Forrest's men massacred the black soldiers in cold blood. Surviving members of the garrison said that most of their men surrendered and threw down their arms, only to be shot or bayoneted by the attackers, who repeatedly shouted, "No quarter! No quarter!"  The phrase "no quarter" generally means that they will take no prisoners -- which would be somewhat consistent with the official Confederate policy toward black soldiers at the time. However, some controversy does still exists around this event and some Confederate sources say that Forrest's forces were firing in self-defense. I find that hard to believe after reading through all the official records, but to be fair wanted to mention it.
A few months later, a few Williamson County men serving in the USCT were taken POW by the Confederates. In late September 1864, Confederate Nathan Bedford Forrest again led his cavalry force into northern Alabama and Middle Tennessee to disrupt the supplies for US General Sherman's march into Georgia. They captured men from the 110th USCT while paroling the white officers. Williamson County's Pvt. Eli Perkins was among the POWs. He was captured on September 24th and managed to escape and return to duty with his regiment on November 1, 1864.
The day after Pvt Eli Perkins was captured, on September 25th, 1864, Forrest moved his forces north of Athens along the Nashville & Decatur railroad to attack a strategic trestle bridge near Elkmont, Alabama at Sulphur Branch Creek. A fort, two blockhouses, and a force of 1,000 US Army soldiers - including the 111th USCT - were defending the trestle. Forrest heavily bombed the fortification and took it and the men as well. Among those captured was Pvt. James Moore (full story here) who lived in Williamson County after the War. The USCT POWs were marched first to Tuscumbia, Alabama. From there, a train took them into Mississippi and finally to Mobile, Alabama. While in Mobile, Pvt. Moore was probably treated terribly. An old cotton warehouse was converted into a prison labor camp that held over five hundred black prisoners. One man said this about his experience:

"We were kept at hard labor and inhumanly treated; if we lagged or faltered, or misunderstood an order, we were whipped and abused; some of our men being detailed to whip others."

Two days later, the 14th US Colored Infantry confronted Forrest's men near Pulaski, Tennessee where his men were tearing up the railroad tracks. The commander of the 14th, Colonel T. J. Morgan recalled in his diary that day,
"The massacre of colored troops at Fort Pillow was well known to us, and had been fully discussed by our men. It was rumored, and thoroughly credited by them, that General Forrest had offered a thousand dollars for the head of any commander of a face with Forest's veteran cavalry."  At least 12 Williamson County men were fighting in the 14th that day when they confronted and turned Forrest's men back.

Additionally, three Williamson County USCT served in the 44th US Colored Infantry and were captured near Dalton, Georgia by General John Bell Hood's Army of Tennessee on October 13, 1864, in Dalton, Georgia. Although the 44th's USCI's Colonel Johnson claimed that his black troops displayed the "greatest anxiety to fight," he surrendered to Hood and secured paroles for himself and the 150 or so other white troops. Hood had previously vowed to take no prisoners when confronting black soldiers and later added that he "could not restrain his men and would not if he could." Here is the official report of their treatment that day. Note that the commander of the troops noted that,
"Although assured by General Hood in person that the terms of the agreement should be strictly observed, my men, especially the colored soldiers, were immediately robbed and abused in a terrible manner. The treatment of the officers of my regiment exceeded anything in brutality I have ever witnessed . . . General Bate [Confederate] was ordered to take charge of us, and immediately commenced heaping insults upon me and my officers. He had my colored soldiers robbed of their shoes . . and sent them down the railroad and made them tear up the track for a distance of nearly two miles. One of my soldiers, who refused to injure the track, was shot on the spot, as were also five others shortly after the surrender, who having been sick, were unable to keep up with the rest on the march.. . . a number of my soldiers were returned to their former masters.." 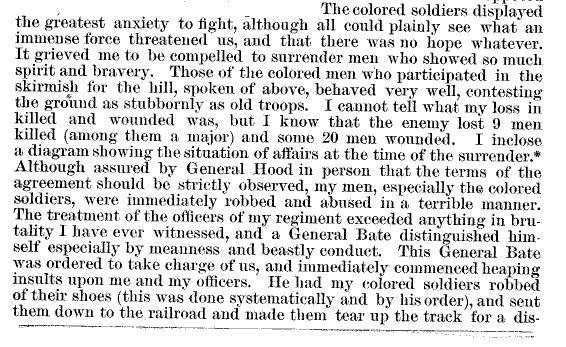 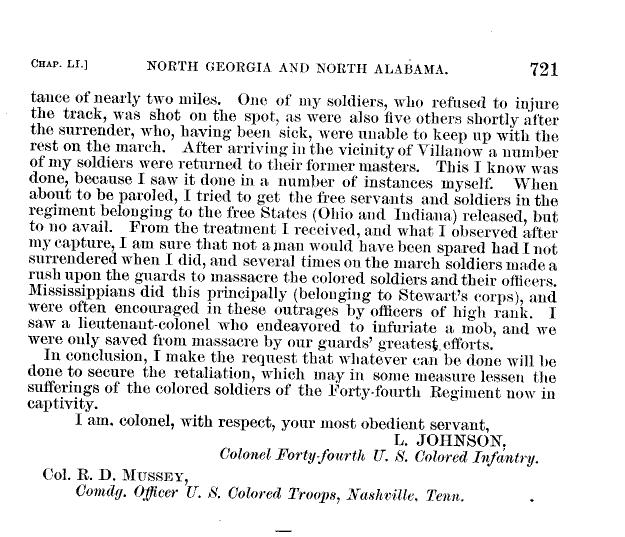 The regiment's 600 African-American enlisted men suffered a harsh fate. As noted, some were re-enslaved, while others were sent to work on Confederate fortification projects in Alabama and Mississippi. Many ended the war as prisoners in Columbus and Griffin, Georgia, where they were released during May 1865 in what one of them described as a "sick, broken down, naked, and starved" condition. All three Williamson County members of the 44th managed to escape and return to duty with the 44th: Sgt. Henry Lanear, Cpl. Harrison Roberts, and Pvt. Granville Scales (full story here).
Locally, at least one group of white officers of the USCT were killed instead of taken POW and perhaps a group of black soldiers was killed.  In late December 1864, US Colored Troops were involved in the pursuit of Confederate John Bell Hood's Army of Tennessee during its retreat following the Battle of Nashville. As I discussed in this blog post, several white officers of black troops were taken prisoner by Confederate soldiers. Two were murdered and one was shot but survived. It was suspected that a group of black privates was also killed. The event was decried by General Ulysses S. Grant.