During the important 1860 Presidential Election (in which President Abraham Lincoln was elected) one of the four Presidential Candidates was John Bell.

Bell was an attorney who first began his practice of law in Franklin following his admission to the bar in 1816.

In 1817, Bell got his start in politics when he was elected to the Tennessee Senate from Franklin. Two years later, in 1819, Bell expanded his professional interests into real estate. He subdivided the land south of Five Points between Columbia Avenue and Evans Street, as far as Fowlkes Street, and called it "Bell Town."

Following the Civil War, the Bell Town Neighborhood became a thriving African American neighborhood. ANC Williams pastored a church there, and black doctors and other community leaders lived in the area.

Bell Town housed several black-owned businesses including a grocery store and hotel, churches, and a Lodge of black Freemasons. A historic marker in the Cummins Street Church of Christ parking lot stands as a testament to the neighborhood and church founder A.N.C Williams. 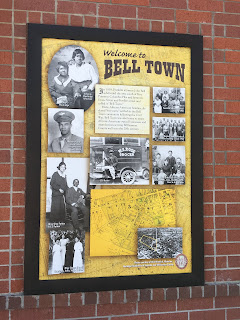