I recently noticed a unique headstone in the historic Toussaint L'Ouveture Cemetery (founded in 1884) in Franklin. It had an interesting emblem on the top, and the statement "Reddick Temple 1232, Franklin, Tenn" near the bottom. I was intrigued.

I started looking for more of these headstones and was able to find several that contained these same markings and notations. I wanted to learn more about their significance. This is what I discovered.

The letters "M", "T", and "A" at the top of the headstones denote the Mosaic Templars of America. The two crossed shepherd staffs in the center represent Moses and Aaron and the Exodus story from the Bible. The “3V’s” represent John E. Bush’s [one of the MTA founders] triumphant motto, adopted from Julius Caesar, “Veni, Vidi, Veci” (“I came, I saw, I conquered.”). Finally an ouroboros (snake eating its tail), representing the cyclical nature of life surrounds the symbol. 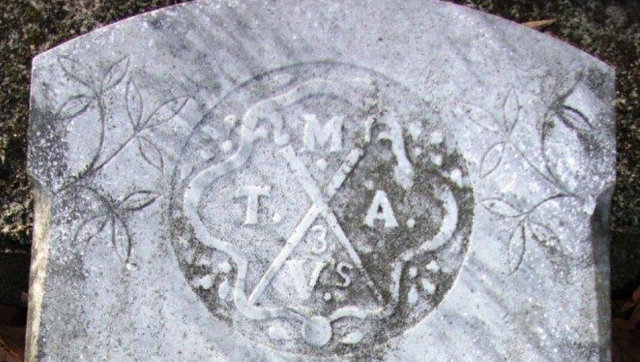 The Mosaic Templars of America

The Mosaic Templars of America was an African American fraternal organization founded in Little Rock, Arkansas in 1883 by John E. Bush and Chester W. Keatts - two men who had both been formerly enslaved. The organization was established to provide burial, insurance and life insurance services to the African-American community.  Fraternal organizations like the MTA were extremely popular during this time period.  Here is a wonderful video called A Time of Joining, produced by NPT's Citizenship Project, about their origin and importance here in Tennessee:

By the early 1900s, local chapters or "temples" of the MTA were starting to spread from Arkansas into additional states, including Tennessee.  Below is part of an article that appeared in the Nashville Globe newspaper in 1917 describing the purpose and operation of the group.

At some point, it appears a Temple was organized in Franklin and named for local resident and prominent African American community leader John Watt Reddick. I suspect that the Reddick Temple may have been organized by John Watt Reddick and thus named after him.  (This article discusses some of his significant history and legacy in Franklin). 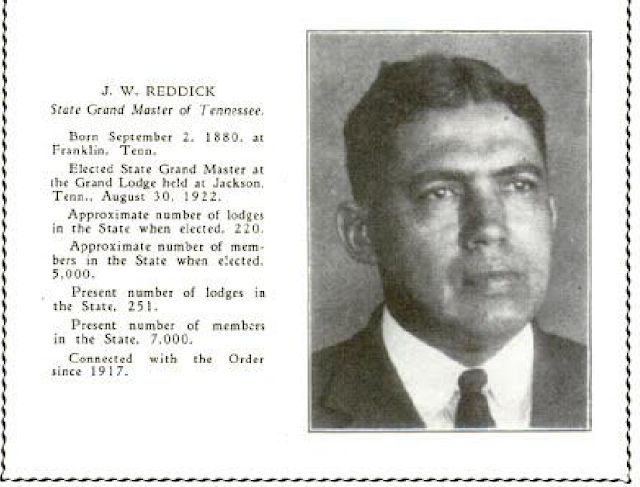 From the book, History of the Mosaic Templars of America: Its Founders and Officials (1924)

Several headstones in Franklin bear the notation Reddick Temple #2132 and I found some obituaries that mention this Temple as well.  The earliest MTA headstone with the Reddick Temple notation was installed in 1918, leading me to believe the Temple must have been organized before or in 1918 - perhaps in 1917, which is when J.W. Reddick joined the MTA.  John Watt Reddick was elected the State Grand Master (its highest office) in 1922. Other chapters of the MTA also appear to have been organized in the area, based on the notations on the Franklin headstones.  They were all called "chambers" which indicates that they were all-female groups: the West Harpeth Chamber, the River Chamber, the Wilson Chamber, the Carothers Chamber, and the Rose of Sharon Chamber.   The earliest of the MTA headstones that appear in Franklin is Grant Holt's headstone - installed in 1918.  The last was Ms. Tabertha Partee's, installed in 1929. Hattie Yarbrough's headstone was installed in 1946 but I think the lettering looks different from the others and I suspect that it was manufactured after the MTA Chamber had ceased operation.

In November 1913 an advertisement appeared in the Nashville Globe newspaper  explaining to the public the purpose of the MTA and how to get involved.    It described that Temples were open to adult males and Chambers were open to adult females.  Also, organizers would be compensated a few dollars for each individual recruited to join their organization. 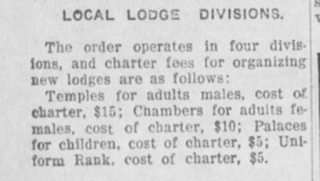 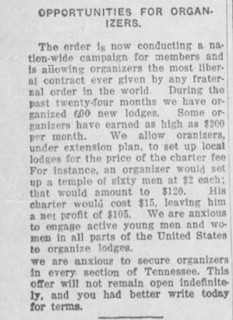 MTA Headstones.  In 1912, the Burial Board of the Mosaic Templars of America met in Nashville. This article in the Nashville Globe newspaper described the growth in the organization nationally.

The Mosaic Templars' burial insurance policies covered funeral expenses for members, both men and women, who maintained monthly dues. According to the book History of the Mosaic Templars of America, its official 1924 history, the MTA authorized a Monument Department in 1914 to provide markers to its deceased members in exchange for the payment of 50 cents per year. This burial insurance policy included a Vermont marble marker like the ones that I found in the Toussaint L'Ouveture Cemetery in Franklin. These traditional MTA markers had a rounded and forward-sloping top, with the MTA symbol cut into the top center. The name of the deceased member was carved below the symbol, with dates of birth (if known) and death. The name of the local chapter, the chapter number, and the city where the chapter was located could be found on the bottom. The dimensions of the markers generally measured twenty-five to twenty-nine inches in height, fifteen to seventeen inches in width, and three to five inches in depth. 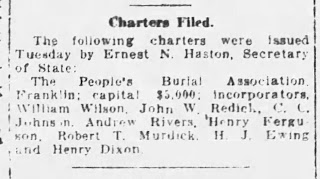 In 1925, John W. Reddick's name was listed among a group of men who incorporated the "People's Burial Association" in Franklin.  It's not clear whether this was associated with the MTA or another endeavor.

That same year, the Tennessee Grand Lodge of the Mosaic Templars of America met in Franklin at the Providence United Primitive Baptist Church on the corner of Natchez St. and Granbury Streets 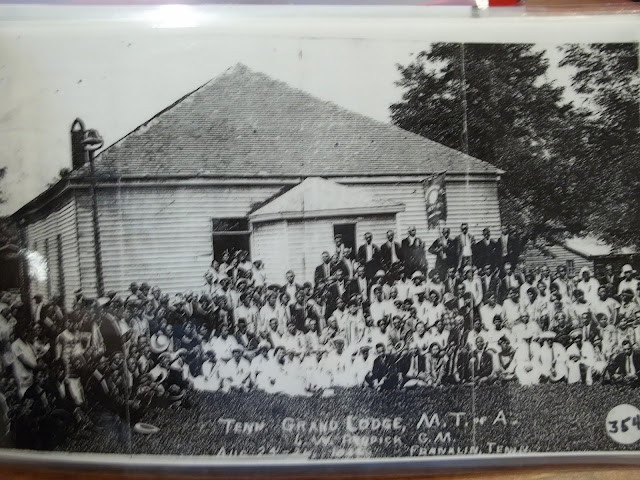 I received a copy of the below letterhead from Leigh Ann Gardner at MTSU.  She has been researching benevolent societies such as the MTA for many years and was nice enough to share these images that she received from the Mosaic Templars of America with me.  On this letter, J.W. Reddick's home office in Franklin - on Columbia Avenue - shows all the officers of the MTA in Tennessee in 1926.  Among those in Williamson County were Fannie Calhoun (Franklin), J. L. Hyde (Nolensville), M.J. Patton (Thompson's Station), Prof. W. F. Reynolds (listed as Nashville but with close Williamson County ties), R. T. Murdick (Franklin), Lettie Ashworth (Burwood), Maggie L. Mayberry (Nashville - but from Leiper's Fork in Williamson County), and Martha Byers (Spring Hill).

In late 1926, J.W. Reddick organized a statewide membership drive for the Tennessee chapters of the MTA for the following year. He planned an ambitious circuit of visits to local cities and towns to educate and enroll new members in the month of May finishing at home in Franklin on May 20th, 1927.   The attached letter to the officer from the LaGrange chapter shows Reddick's plans to visit 18 sites in the month.  He signed the letter with the organization's motto - "Yours in 3V's"
However,  on Christmas Day, 1926 the Cumberland River at Nashville crested at 56 ft 2 in - which is higher than even the devastating 2010 floods (when the Cumberland reached 51.86 feet). Flooding in the Mississippi River effected states all along its length as well.  By May, the River below Memphis was 60 miles wide. The flooding from this event is still considered to be America's worst in its history. As this catastrophe unfolded J. W. Reddick received notice from the National Office of the MTA in Arkansas  to delay his membership campaign).

Receivership and End of MTA.  Unfortunately, largely brought on by the Great Depression and perhaps by the effects of the flooding, in July 1930, the Mosaic Templars of America went into receivership. The organization struggled to regain its status, but by the end of the decade it had ceased operations.

Below are photographs of all the MTA headstones that I could locate in Toussaint L'Ouveture Cemetery in Franklin.  If you know of or find others that I have missed, or know of other MTA headstones elsewhere in Williamson County cemeteries, please let me know - I would love to include them in this post.  You can contact me through the "About Me" section of this blog.

MTA Members in Franklin  A search of the MTA registry on their website revealed the following names (below) associated with MTA chapters in Franklin, Tennessee. When possible, I have added additional information to the listings.  I suspect that since John Watt Reddick was the Grand Master of the MTA in Tennessee, many of these members assigned to the Franklin chapter may have not actually lived here.  When I researched the people listed below, many of them seem to have lived in Nashville, Memphis or other towns in Tennessee.  I speculate that he recruited them to join the MTA through his Reddick Temple or perhaps they were listed on the rolls under his address while he was the Grand Master.  Its also interesting to me that many of the people with MTA headstones in Franklin do not appear on this list, leading me to believe that this list of Franklin's MTA members is incomplete.


5. DIXON, S. J., REV.
Chapter: Tennessee Jurisdiction
City, State: Franklin, Tennessee
Rank: S.G.C. of Tennessee; S.C.G.D. of Tennessee
MTA Marker: Unknown
I think this was Rev. Dixon of Houston, Texas. In 1918 he was elected Field Secretary of the Home Mission Board of the National Baptist Convention. He was sent to Little Rock, Arkansas (the headquarters of the MTA) from Nashville (the headquarters of the National Baptist Publishing Board.

10. PARRISH, NANCY
Chapter: Tennessee Jurisdiction
City, State: West Harpeth, Tennessee
Rank: Tennessee Burial Board
MTA Marker: No
- This is probably Nancy Parrish, born around 1868.  She was married to John Parrish, the couple lived on Lewisburg Pike in Franklin where they farmed and raised their family. She died 21 Jan 1938. 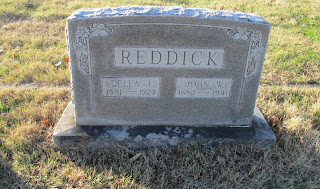 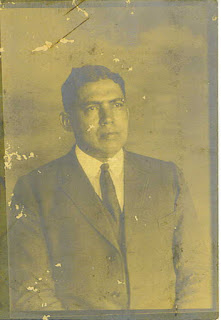 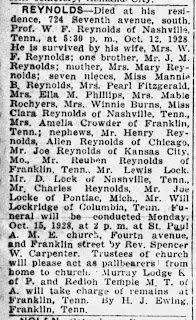 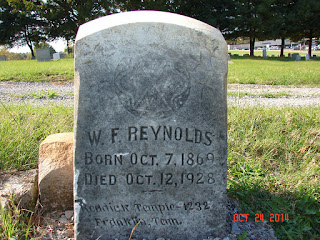