Andrew Ewing was a veteran of the 12th US Colored Infantry - he served as the sergeant major of the regiment.

He was born in 1831 in Williamson County and was enslaved initially by Alexander Ewing.

When Andrew Ewing was three years old, Alexander Ewing died and Andrew passed into his estate. An inventory of Alexander Ewing's property dated July 8, 1834 shortly after his death, included a list of the goods and chattel owned by him.  It included the names and ages of twenty people - one of whom was "little Andrew, age 3 years."  I believe this three-year old boy was Andrew Ewing.  According to Alexander Ewing's daughter Sallie, Andrew was placed in a trust for her brother William - who was an infant at the time.

Andrew was hired out from "year to year" from his adolescence through his teenage and early adult years. This was a common practice which I covered in more depth in another blog post.

On February 24, 1862 Nashville fell to US forces.  Many slaves in Williamson County (contrabands) began to emancipate themselves and gather around the arriving Army camps for protection, employment, shelter, and food. According to the History of the 78th Volunteer Pennsylvania Infantry:

The summer of 1862 was a very eventful and critical period in the War. About the middle of March General Buell commenced his march through Franklin and Columbia to Pittsburg Landing on the Tennessee River. . . . On the 23rd of March the 78th Regiment left Camp Andy Johnson, marched twenty-two miles southward, and bivouacked a mile south of Franklin. On the 25th we marched eighteen miles farther south to Camp "Bill Sirwell" on Carter's Creek, not far from Columbia. From this time onward the Regiment with Head Quarters at Franklin and Columbia guarded the lines of communication between General Buell's Army and his base of supplies on the railroads running southward through Franklin, Columbia and Pulaski.  . . .we guarded Franklin, Columbia, Pulaski, the railroad over Carter's Creek and many other important adjacent points.
These US soldiers would have marched right through Franklin. Andrew, Mary and their children would have seen them out foraging and on patrols, and perhaps they were inspired and emboldened to leave for Nashville - maybe even enabled by them. Skirmishing continued throughout the year – with control of Franklin changing hands repeatedly. On September 22, 1862 President Lincoln announced the Emancipation Proclamation. Its hard to know how or when Andrew Ewing would have first learned of this seemingly impossible announcement. Although the emancipation sections did not apply to Tennessee, it laid out a tantalizing dream for so many enslaved people across the South. And for Andrew Ewing, it also declared that he could serve in the US Army or Navy.


Life as a Laborer and Soldier

That same year, when Andrew was about 31 years old, he made his way, along with thousands of other enslaved laborers to Nashville where he worked to build fortifications, including Fort Negley, for the US Army. His name appears on the list of nearly 3,000 "paid and unpaid" (mostly unpaid) laborers that helped to build forts during the Civil War.  His "owner" was listed as "W. Ewing" - William Ewing - Sallie Ewing's brother. 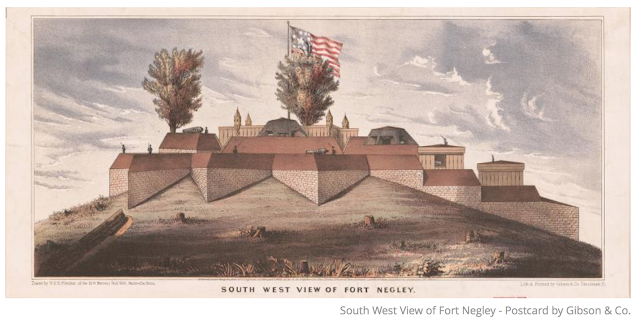 On August 12, 1863, Andrew enlisted in the 12th US Colored Infantry, Company B.  He was described as 5"7" tall, 30 years old, a laborer, and born in Williamson County.   The following is an excerpt from a Report that was compiled by General George Stearns regarding his efforts to recruit African American troops for the US Army: 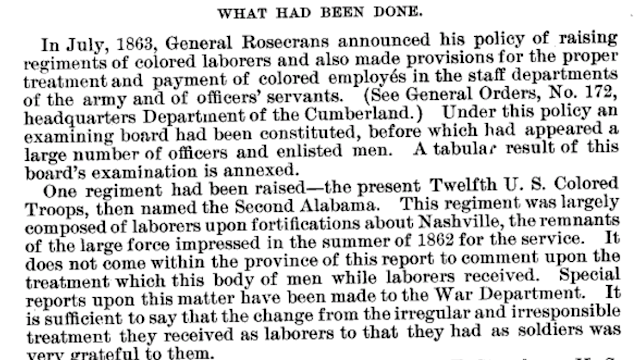 Shortly after he mustered into the 12th USCI, Andrew Ewing and the rest of his regiment were sent to guard the railroad bridge over the Elk River. 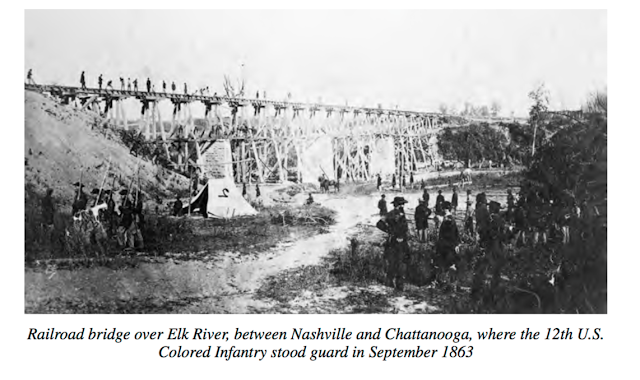 On December 1, 1863 Andrew Ewing was promoted to sergeant major of the regiment - an impressive accomplishment which indicates that he was both literate and well respected by enlisted men and officers alike.

The 12th US Colored Infantry spent much of the rest of the War west of Nashville near Johnsonville helping to build and guard the railroad line to the Tennessee River.  In early November 1864 they were involved in an attack by Confederate John Bell Hood's forces on the Johnsonville battery.
In early December 1864 they marched to Clarksville where they were involved in skirmishes with Confederate forces.  This was just days after the bloody Battle of Franklin back home where Andrew Ewing's family may have been.

On December 15-16, 1864 the 12th US Colored Infantry participated in the Battle of Nashville. I've written more extensively about this significant event here.  Andrew Ewing was injured during the fighting when a cannonball broke a tree limb out of a tree that he was standing either in or under and the limb fell and injured his leg.  However he stayed with his company for the pursuit of Hood's Confederate Army of Tennessee - at least as far as Franklin.  When the US Army troops arrived in Franklin on the heels of the defeated Confederates, Sgt Ewing was "left sick at Franklin, Tenn."  I have not been able to determine exactly where he was left - in a field hospital? in one of the buildings used as a US Army hospital such as St. Paul's Episcopal Church or the Masonic Hall? I would love to know.


About a year later, in October 1865, Andrew Ewing was discharged from the Army due to disability.  The reason stated was "rheumatism and stiffness of the knee and ankle joints . . . contracted in December [1864] during a campaign from Nashville, TN to LaGrange, AL in the line of duty resulting from cold and exposure after the Battle of Nashville."

Life as a Freedman

Shortly after he left the Army, Sergeant Ewing must have returned to Williamson County because by January 1st he had entered into a Labor Contract, negotiated under the auspices of the Freedmen's Bureau.  Sergeant Ewing and William B. Giles signed Labor Contract #368.  Andrew Ewing agreed to work in Giles’ blacksmith shop and Andrew's wife agreed to help in the Giles' house; the Ewing's were to be paid $275 for the year.  The families were living in District 21 of Williamson County near Jordan's Store (south of College Grove).

In 1868, Sgt. Ewing applied for a pension from the US government, and in 1869 Andrew's wife died.  Sgt Ewing worked for W. B. Giles learning the blacksmith trade for several years - at least through 1870. Andrew appears on the 1870 Census as a "domestic servant" working for the Giles family.  Soon after he seems to have married Mary Ellen Gadsey and the couple moved to Brentwood.

Andrew and Mary Ellen had 7 daughters together.  By 1880, the Ewings moved to Nashville to raise their daughters and Sgt Ewing was still trying to work as a blacksmith, although the pension examiners found him at this time to be nearly 75% disabled by his war injuries.

Sgt. Ewing was a hard worker and despite his disability continue to try to work his whole life.  When he was almost 70 years old, in 1900, his daughter Lilly told a pension examiner that he was working at "Bush's brickyard in north Nashville", when he was able, "batching bricks" - in other words - he was making bricks by hand.  Bush's Brickyard continued to make some bricks by hand until the 1950s although most of them were mass produced for this large company that still exists today under the name R. D. Herbert & Sons.

On February 24, 1901, at the age of 70, Sergeant Ewing died of pneumonia at his home in Bryant Town.  I have not been able to locate his grave.