NOTE:  Since I wrote this post, State law regarding NB Forrest's Special Observance Day has chanced - please read the full blog.
Today is July 13th.  Under Tenn. Code Ann. 15-2-101, "Each year it is the duty of the governor . . . to proclaim . . . July 13 "Nathan Bedford Forrest Day" . . . . The governor shall invite the people of this state to observe the day[ ] in schools, churches, and other suitable places with appropriate ceremonies expressive of the public sentiment befitting the anniversary of such date[ ]."

For now, I think I will "observe the day[] . . .with" what I consider to be an "appropriate ceremon[y] expressi[ng]" my "sentiment befitting the anniversary of such date[]."

I will observe a moment of silence and remember that Nathan Bedford Forrest was not "just" someone who enslaved other people.  He actively bought and sold them.  He was a slave trader - perhaps the worst kind of slaver. He profited on the separation of mothers from children, and husbands from wives - and from their uncompensated and ill-gotten labors. Just three years before the Confederate States of America began their rebellion he was advertising in Nashville newspapers looking to buy 500 people - who he would then sell at a profit. 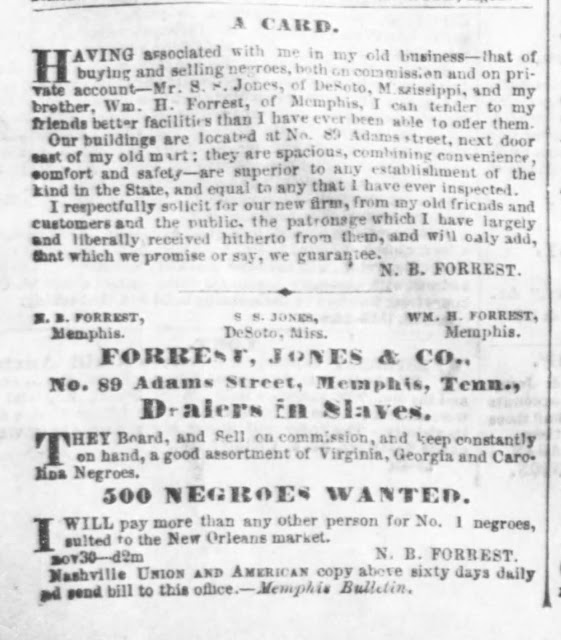 The sale of these people resulted in families being torn apart. Mother's like Nellie Harbold lost their children, husbands lost wives, and siblings never saw each other again.

During the Civil War, Forrest was a notorious officer of the rebelling Army of the Confederate States of America. While often heralded for his military tactics, locally he viciously conscripted men and boys into his ranks.


In April 1864, in what has been called "one of the bleakest, saddest events of American military history." Confederate troops under Forrest's command massacred US Army soldiers who had surrendered, most of them African American soldiers of the United States Colored Troops, at the Battle of Fort Pillow. The report of a US Naval commander who arrived on the scene shortly after described it this way:


All the wounded who had strength enough to speak agreed that after the fort was taken an indiscriminate slaughter of our troops was carried on by the enemy with a furious and vindictive savageness ...Bodies with gaping wounds, some bayoneted through the eyes, some with skulls beaten through, others with hideous wounds as if their bowels had been ripped open with bowie-knives, plainly told that but little quarter was shown to our troops. Strewn from the fort to the river bank, in the ravines and hollows, behind logs and under the brush where they had crept for protection from the assassins who pursued them, we found bodies bayoneted, beaten, and shot to death, showing how cold-blooded and persistent was the slaughter of our unfortunate troops. Of course, when a work is carried by assault there will always be more or less bloodshed, even when all resistance has ceased; but here there were unmistakable evidences of a massacre carried on long after any resistance could have been offered, with a cold-blooded barbarity and perseverance which nothing can palliate.

As near as I can learn, there were about 500 men in the fort when it was stormed. I received about 100 men, including the wounded and those I took on board before the flag of truce was sent in. The rebels, I learned, had few prisoners; so that at least 300 of our troops must have been killed in this affair.

Finally, following the War, Forrest was named the first Grand Wizard of the KKK - elected to that position in 1867 as racial terror and lynchings reigned across the state and the south.

History of Observance of Forrest's Birthday.  It is important with the outcry around this year's proclamation to remember that this year's "day of observance" is nothing new.  For about a century, the state has commemorated the birth of Forrest. In fact, the work to rehabilitate Forrest's image began in earnest as the second-version of the KKK was on the rise.

By February 1919, lynchings had become so common in Tennessee that 2,000 black men participated in a silent protest and march to the state capitol.

Simultaneously, the push to commemorate Forrest was growing.


Beginning in 1921 (which was also, for context, the year of the racial attack in Tulsa on the black Greenwood business district) the Tennessee government began to honor Forrest's birthday with a state-wide holiday.


In 1923, the KKK burned a large cross in Nashville as part of a recruitment effort.


And in 1924 they marched in downtown Franklin. 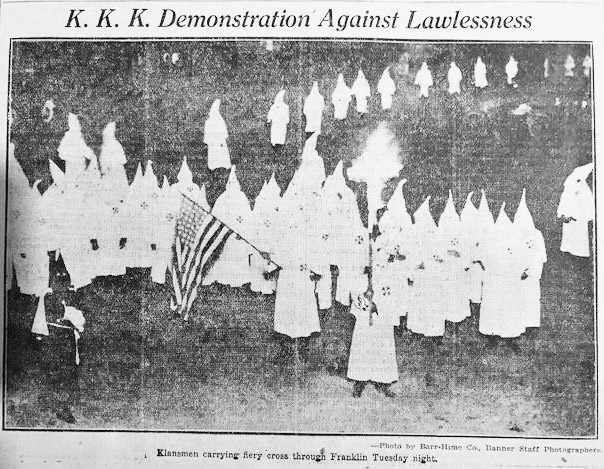 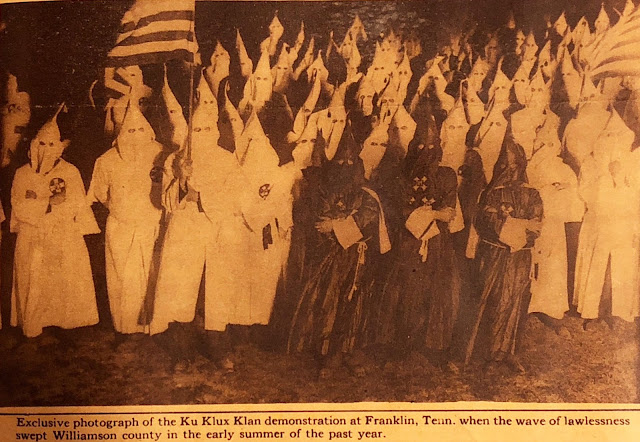 In 1925, 15 year old Sam Smith was lynched on Nolensville Road near the Davidson-Williamson County line by a mob of masked men - probably Klan - who took him from a hospital bed and shot and hung his body from a tree.

During this time, the state's celebration - not just a remembrance but a celebration-  of the Klan's first Grand Wizard's birthday continued. . . .


In 1927, the state of Tennessee erected a monument to Forrest at his birthplace in Chapel Hill, Tennessee. And throughout the 1930s, the celebrations of his birthday continued. . .


Following the Brown vs. Board of Education ruling, in 1957 as Nashville moved to desegregate its schools, protestors held up signs referencing Forrest's KKK while school children walked to their first day of school.

In the spring of 1961, as part of a year-long, Confederate-heavy, celebration of the 100th anniversary of the Civil War, the Nathan Bedford Forrest Park was created near the site of the Battle of Johnsonville - a battle famous among many historians because of its significance to the US Colored Troops (African American regiments) during the Civil War.

In June, the state continued the commemoration of the War with a re-enactment of the state's secession.  A Confederate flag was raised over the Tennesese state capitol while "Stars and Bars" was "briskly played." Tennessee's "old-time Declaration of Independence" [i.e. its declaration of secession] was also read from the portico. Participating in the subsequent parade was the Kavalry Kadet Korp (KKK) - I kid you not - a youth organization mounted on Shetland ponies.

That same year, Dr. Martin Luther King spoke in Nashville, and parents in Franklin, Tennessee joined the fight for desegregation of the local schools.
Later that year, some broader resistance began to form to the holiday - but ostensibly not due to its honoree - rather for the inconvenience, it caused due to the closing of government offices. 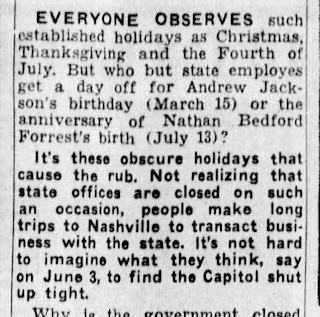 But, not surprisingly, the state holiday commemorating his birthday continued . . .

However, in 1969, the state did strip the date of some of its prominence and consolidated the state holidays making Nathan Bedford Forrest Day, a day of "special observance."

Forrest was not forgotten, though. In 1973, the Sons of Confederate Veterans unveiled a portrait of Forrest to be hung in the Capitol and five years later - in late 1978 - amidst protests - a bust to Forrest was placed in the Capitol. A few months later, in February 1979, protestors convened again at the capitol to protest the Forrest bust and it was damaged. Two days later, a cross was burned at the Nashville NAACP headquarters.

In 1980, the KKK held a press conference in front of the Forrest bust as they announced that they were training SWAT teams for a race war.

By 1992, louder voices began to be raised protesting the continued hero-worship of Forrest. The Tennessean ran competing opinion pieces on his birthday that year.

Efforts to End Day of Observance in Forrest's Honor. In 2015, calls to remove the bust from the capitol resumed. Additionally, there were legislative efforts to remove Forrest Day from the list of "special observances" honored by the state. 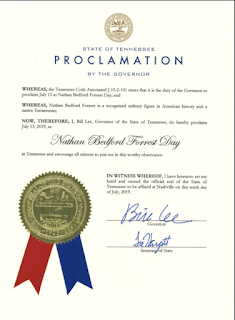 This opposition made for strange bedfellows as it drew condemnation from the right and left.

I fully support those who would change the state law and end the commemoration of Forrest's birthday and remove the bust from the capitol. However, it is important to remember that this year's proclamation did not happen in a vacuum - it came about as a long history of the state's formal and public honoring of Nathan Bedford Forrest, and by proxy, his deeds.

UPDATE:  Two days later, Governor Lee announced in a series of tweets his plans to work to change the state law regarding the required proclamation.

This afternoon, I sat down for an interview to clear the air on something that everyone’s been talking about – the Nathan Bedford Forrest Proclamation. While it is my job as governor to enforce the law, I want Tennesseans to know where my heart is on this issue. Our state’s history is rich, complex and in some cases painful. With this in mind, I will be working to change this law.

He then linked to an interview that he gave in which he said,

“I want to share my heart about this,” the governor said. “I didn’t like it, and I want to explain why I didn’t like it and why I didn’t want to sign it. There are parts of our history that are painful particularly to African Americans. . . .Nathan Bedford Forrest and his parts of life is part of painful history and why I, we need to look at changing law and I will work with legislators to do that."

Regarding calls to remove the bust of Forrest at the capitol he said, "We need to have a broader conversation about that as well."

In January 2019 the Naming, Designating and Private Acts House Committee held a hearing on the issue and rolled the bill to the end of the calendar year (basically killing it). The vote was 13 to 4 along party lines (Republicans voting against moving the bust), with the Chairman John Mark Windle (D-Livingston) not casting a vote.

On February 20, 2020, the State Capitol Commission met to discuss moving the bust to the Tennessee State Museum. They took no action.

If the Commission is amenable to moving the bust, they would need to request a waiver from the Heritage Protection Act from the Tennessee Historical Commission. The earliest that group could hear a request for removal would be at their June meeting, with a final hearing at their October meeting.

UPDATE: On June 10, 2020, the Tennessee State Legislature, at the tail end of a truncated legislative session due to the CoVid-19 pandemic, passed a bill releasing the Governor from teh requirement to recognize the statutory "Special Observance Days" - including Nathan Bedford Forrest Day.  Governor Lee has stated that he will not be signing a declaration this coming July.  So, for the first time in a long time, Tennessee will not be celebrating Forrest this year.
Additionally, following the deaths of several Black Americans earlier this spring and summer and the following demonstrations and calls for racial justice, protests over the Forrest bust have increased.  In June 2020, the state legislature debated removing the bust, but it failed to get moved out of Committee. However, this week, Governor Lee called for a special meeting of the Capitol Committee to consider removal of the bust.  Today, July 9, 2020 they met and voted in favor of its removal to the State Museum, along with two other busts of military officials. Now, the issue will go to the Tennessee Historical Commission.
Posted by Tina Cahalan Jones at Saturday, July 13, 2019